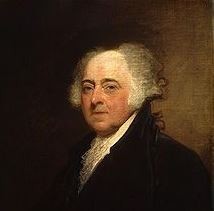 Cause of death: Congestive heart failure

John Adams followed Washington's lead in using the presidency to exemplify republican values and civic virtue; and his service was free of scandal. He continued to strengthen the central government by expanding the Navy and Army. In July 1798 Adams signed into law the Act for the Relief of Sick and Disabled Seamen, which authorized the establishment of a government-operated marine hospital service.

Historians debate his decision to retain en masse the members of Washington's cabinet. Many felt he was oblivious to the political danger of such a decision, in light of the cabinet's loyalty to Hamilton. The "Hamiltonians who surround him," Jefferson soon remarked, "you are only a little less hostile to him than to me." Although aware of the Hamilton factor, Adams was convinced their retention ensured a smoother succession. Adams' economic programs maintained those of Hamilton, who indeed had regularly consulted with key cabinet members, especially the powerful Secretary of the Treasury, Oliver Wolcott, Jr. Adams was in other respects quite independent of his cabinet, often making decisions despite strong opposition from it. Such self-reliance enabled him to avoid war with France, despite a strong desire among his cabinet secretaries for the conflict. The Quasi-War with France resulted in the detachment from European affairs that Washington had sought. It also had psychological benefits, allowing America to view itself as holding its own against a European power.

Historian George Herring argues that Adams was the most independent-minded of the founders. Though he aligned with the Federalists, he was somewhat a party unto himself, disagreeing with the Federalists as much as he did the Democratic-Republicans. He was often described as "prickly", but his tenacity was fed by good decisions made in the face of universal opposition. Adams was often combative, which diminished presidential decorum, as Adams himself admitted in his old age: "[As president] I refused to suffer in silence. I sighed, sobbed, and groaned, and sometimes screeched and screamed. And I must confess to my shame and sorrow that I sometimes swore." Adams' resolve to advance peace with France, rather than to continue hostilities, especially reduced his popularity. This played an important role in his reelection defeat, however he was so pleased with the outcome that he had it engraved on his tombstone. Adams spent much of his term at home in Massachusetts, ignoring the details of political patronage nursed by other office holders.