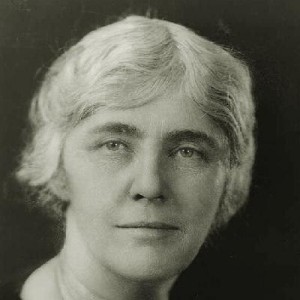 Lou Henry was born in Waterloo, Iowa, to banker Charles Delano Henry and Florence Ida Weed. Lou grew up something of a tomboy in Waterloo, as well as Whittier, California, and Monterey, California. Charles Henry took his daughter on camping trips in the hills—her greatest pleasures in her early teens. Lou became a fine horsewoman; she hunted, and preserved specimens with the skill of a taxidermist; she developed an enthusiasm for rocks, minerals, and mining.

Hoover's postsecondary school began at the Los Angeles Normal School, now known as the University of California, Los Angeles. She later transferred to and graduated from San Jose Normal School, now known as San Jose State University, with a teaching credential in 1893. She then went to Stanford University where she met Herbert Hoover, who was then a senior. In 1898 she graduated—as the school's only female geology major at the time—with a B.A. in Geology.

Mrs. Hoover distinguished herself by becoming the first First Lady to broadcast on a regular and nationwide basis. Although she did not have her own radio program, she participated as a guest speaker on a number of occasions between 1929 and 1933, often advocating for volunteerism, or discussing the work of the Girl Scouts. Radio critics praised her for having an excellent radio voice and for speaking with confidence.

As First Lady, she discontinued the New Year's Day reception, the annual open house observance begun by Abigail Adams in 1801.