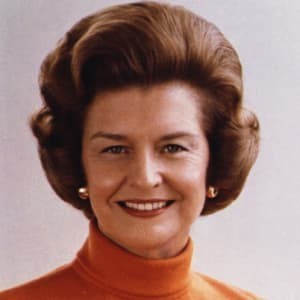 Ford was born Elizabeth Anne Bloomer in 1918 in Chicago, Illinois, the third child and only daughter of Hortense (née Neahr; 1884 – 1948) and William Stephenson Bloomer, Sr. (1874 – 1934), who was a traveling salesman for Royal Rubber Co. She was called Betty as a child.

Hortense and William married on November 9, 1904 in Chicago. Betty's two older brothers were Robert (d. 1971) and William Jr. After the family lived briefly in Denver, Colorado, she grew up in Grand Rapids, Michigan, where she graduated from Central High School.

At the age of 11, she began modeling clothes and teaching children popular dances, such as the foxtrot, waltz, and big apple, to earn money in the wake of the Wall Street Crash of 1929. She worked with children with disabilities at the Mary Free Bed Home for Crippled Children. She studied dance at the Calla Travis Dance Studio, graduating in 1935.

When Bloomer was age 16, her father died of carbon monoxide poisoning in the family's garage while working under their car, despite the garage doors being open. He died the day before his 60th birthday.

In 1936, after graduating from high school, Bloomer proposed continuing her study of dance in New York City, but her mother refused. She instead attended the Bennington School of Dance in Bennington, Vermont, for two summers, where she studied under director Martha Hill with choreographers Martha Graham and Hanya Holm. After being accepted by Graham as a student, Bloomer moved to New York City to live in its Manhattan's Chelsea neighborhood; she worked as a fashion model for the John Robert Powers firm in order to finance her dance studies. She joined Graham's auxiliary troupe and eventually performed with the company at Carnegie Hall in New York City.

Bloomer's mother opposed to her pursuing a career and insisted that she return home, and, as a compromise, they agreed that Bloomer would return home for six months and, if she still wanted to return to New York City at the end of that time, her mother would not protest further. Bloomer became immersed in her life in Grand Rapids and did not return to New York. Her mother remarried, to family friend and neighbor Arthur Meigs Goodwin, and Bloomer lived with them. She got a job as assistant to the fashion coordinator for Herpolsheimer's, a local department store. She also organized her own dance group and taught dance at various sites in Grand Rapids.

In 1942, Elizabeth Bloomer married William G. Warren, who worked for his father in insurance sales, and whom she had known since she was 12. William Warren began selling insurance for another company shortly after their marriage. He later worked for Continental Can Co., and after that for Widdicomb Furniture. The couple moved frequently because of his work. At one point, they lived in Toledo, Ohio, where Elizabeth was employed at the department store Lasalle & Koch as a demonstrator, a job that entailed being a model and saleswoman. She worked a production line for a frozen-food company in Fulton, New York. When they returned to Grand Rapids, she worked again at Herpolsheimer's, this time as the fashion coordinator.[8] Warren was an alcoholic and in poor health. Just after Betty decided to file for divorce, he went into a coma. She took care of him for another two years as he convalesced, at his family's home. She stayed upstairs while he was nursed downstairs. After he recovered, they were divorced on September 22, 1947.

On October 15, 1948, Elizabeth married Gerald Ford, a lawyer and World War II veteran, at Grace Episcopal Church, in Grand Rapids. Gerald Ford was then campaigning for what would be his first of thirteen terms as a member of the U.S. House of Representatives. In the first of adjustments for politics, he asked her to delay the wedding until shortly before the elections because, as The New York Times reported, "Jerry was running for Congress and wasn't sure how voters might feel about his marrying a divorced ex-dancer."

The Fords moved to the Virginia suburbs of Washington, D.C., and lived there for twenty-five years. Gerald Ford rose to become the highest-ranking Republican in the House. After Spiro Agnew resigned as Vice President in 1973, President Richard Nixon appointed Gerald Ford to the position. He succeeded to the presidency in 1974, upon Nixon's resignation in the wake of the Watergate scandal.

The Fords, who were married 58 years until Gerald's death, were among the more openly affectionate First Couples in United States history. Neither was shy about their mutual love and equal respect, and they were known to have a strong personal and political partnership.

First Lady of the United States

Vice President Gerald Ford is sworn in as the 38th President of the United States by Chief Justice Warren Burgerin the East Room at the White Houseas Betty Ford looks on.

Reporters wondered what kind of first lady Ford would be, as they thought her predecessor, Pat Nixon, as noted by one reporter, to be the "most disciplined, composed first lady in history." In the opinion of The New York Timesand several presidential historians, "Mrs. Ford's impact on American culture may be far wider and more lasting than that of her husband, who served a mere 896 days, much of it spent trying to restore the dignity of the office of the president."

Steinhauer of The New York Times described Ford as "a product and symbol of the cultural and political times — doing the Bump dance along the corridors of the White House, donning a mood ring, chatting on her CB radio with the handle First Mama — a housewife who argued passionately for equal rights for women, a mother of four who mused about drugs, abortion and premarital sex aloud and without regret." In 1975, in an interview with McCall's, Ford said that she was asked just about everything, except for how often she and the president had sex. "And if they'd asked me that I would have told them," she said, adding that her response would be, "As often as possible."

She was open about the benefits of psychiatric treatment, and spoke understandingly about marijuana use and premarital sex. The new First Lady noted during a televised White House tour that she and the President shared the same bed. Ford was a guest on 60 Minutes and, in a characteristically candid interview, she discussed how she would counsel her daughter if she was having an affair. She said she "would not be surprised" by that, and also acknowledged that her children may have experimented with marijuana, which was popular among the young. Some conservatives called her "No Lady" for her comments and demanded her "resignation", but her overall approval rating was at a high seventy-five percent. As she later said, during her husband's failed 1976 presidential campaign, "I would give my life to have Jerry have my poll numbers."

Her outspoken comments also caused President Ford's advisors dismay due to their attempts at restoring America's composure in the wake of Watergate.

During her time as First Lady, Ford was an outspoken advocate of women's rights and was a prominent force in the Women's Movement of the 1970s. She supported the proposed ERA and lobbied state legislatures to ratify the amendment, and took on opponents of the amendment. She was also un-apologetically pro-choice. Her active political role prompted Time to call her the country's "Fighting First Lady" and name her a Woman of the Year in 1975, as representing American women, along with other feminist icons.

In May 1975, during a four-day trip, Ford met with former Prime Minister of the Republic of Vietnam Nguyễn Cao Kỳ to discuss Southeast Asia refugees, Ford afterward stating she was impressed with the conduct of the refugees.

On June 30, 1976, Ford attended the opening of "Remember the Ladies", a Revolutionary War era women exhibit. She drew boos from demonstrators against the Equal Rights Amendment in stating, "This exhibit about neglected Americans should give us strength and courage to seek equal rights for women today."

For a time, it was unclear whether Gerald Ford shared his wife's pro-choice viewpoint. In December 1999, he told interviewer Larry King that he, too, was pro-choice and had been criticized for that stance by conservative forces within the Republican Party.

Betty Ford reads her husband's concession speech to the press

After Gerald Ford's defeat by Jimmy Carter in the 1976 presidential election she delivered her husband's concession speech because he had lost his voice while campaigning.

On January 19, 1977, Betty Ford used her training as a Martha Graham dancer to jump up on the Cabinet Room table. Someone took a photo of her on the table. A Ford family friend said Gerald Ford "about fell off his chair" when he saw the photo for the first time.