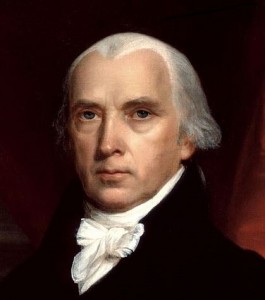 Cause of death: Congestive heart failure

James Madison Jr. (March 16 [O.S. March 5], 1751 – June 28, 1836) was an American statesman and Founding Father who served as the fourth President of the United States from 1809 to 1817. He is hailed as the "Father of the Constitution" for his pivotal role in drafting and promoting the United States Constitution and the Bill of Rights.

Madison inherited his plantation Montpelier in Virginia and there with owned hundreds of slaves during his lifetime. He served as both a member of the Virginia House of Delegates and as a member of the Continental Congress prior to the Constitutional Convention. After the Convention, he became one of the leaders in the movement to ratify the Constitution, both in Virginia and nationally. His collaboration with Alexander Hamilton and John Jay produced The Federalist Papers, among the most important treatises in support of the Constitution. Madison's political views changed throughout his life. During deliberations on the Constitution, he favored a strong national government, but later preferred stronger state governments, before settling between the two extremes later in his life.

In 1789, Madison became a leader in the new House of Representatives, drafting many general laws. He is noted for drafting the first ten amendments to the Constitution, and thus is known also as the "Father of the Bill of Rights." He worked closely with President George Washington to organize the new federal government. Breaking with Hamilton and the Federalist Party in 1791, he and Thomas Jefferson organized the Democratic-Republican Party. In response to the Alien and Sedition Acts, Jefferson and Madison drafted the Kentucky and Virginia Resolutions, arguing that states can nullify unconstitutional laws.

As Jefferson's Secretary of State (1801–1809), Madison supervised the Louisiana Purchase, which doubled the nation's size. Madison succeeded Jefferson as president in 1809, was re-elected in 1812, and presided over renewed prosperity for several years. After the failure of diplomatic protests and a trade embargo against the United Kingdom, he led the U.S. into the War of 1812. The war was an administrative morass, as the United States had neither a strong army nor financial system. As a result, Madison afterward supported a stronger national government and military, as well as the national bank, which he had long opposed. Madison has been ranked in the aggregate by historians as the ninth most successful president.

With Jefferson's retirement imminent as his second term came to a close, Madison became his party's choice for president in 1808. He was opposed by Rep. John Randolph, who had broken earlier with Jefferson and Madison. The Republican Party Congressional caucus chose the candidate and easily selected Madison over James Monroe. As the Federalist Party by this time had largely collapsed outside New England, Madison easily defeated Federalist Charles Cotesworth Pinckney. At a height of only five feet, four inches (163 cm), and never weighing more than 100 pounds, he became the most diminutive president.