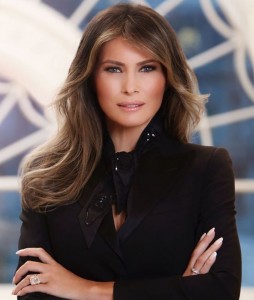 Education: University of Ljubljana
Melania Trump (born Melanija Knavs [mɛˈlaːnija ˈknaːu̯s], April 26, 1970; Germanized to Melania Knauss) is the current First Lady of the United States. Before marrying future President Donald Trump in 2005, she worked as a fashion model; by 2016 she considered herself a "full-time mom".

She was born in the city of Novo Mesto in Slovenia, then known as the Socialist Republic of Slovenia within Yugoslavia. She became a permanent resident of the United States in 2001, and obtained U.S. citizenship in 2006.

| "I am fortunate for my heritage, but also for where it brought me today. I traveled the world while working hard in the incredible arena of fashion. After living and working in Milan and Paris, I arrived in New York City 20 years ago, and I saw both the joys and the hardships of daily life. On July 28, 2006, I was very proud to become a citizen of the United States — the greatest privilege on planet Earth. I cannot, or will not, take the freedoms this country offers for granted."
Melania assumed the role of First Lady of the United States on January 20, 2017. She is the second foreign-born woman to hold this title (after Louisa Adams, wife of John Quincy Adams, who was born in 1775 in London to an American father and British mother). She is the first First Lady to be a naturalized citizen (rather than birthright citizen), and the first whose mother tongue is not English. At 5 feet 11 inches (1.80 m), she is also one of the tallest First Ladies to hold the office, tied with Michelle Obama and Eleanor Roosevelt. She continued living in Trump Tower with her son Barron until the end of the 2016–17 school year, and moved to the White House on June 11, 2017.

When asked by The New York Times in 1999 what her role would be if Donald Trump were to become president, Melania replied: "I would be very traditional. Like Betty Ford or Jackie Kennedy." In 2016, she told CNN her focus as First Lady would be to help women and children. She also said she would combat cyberbullying, especially among children, having quit social media herself due to the "negativity".
The first White House event led by Trump was a luncheon for International Women's Day on March 8, 2017. Trump spoke to an audience of women about her life as a female immigrant, and about working towards gender equality both domestically and abroad, noting the role of education as a tool against gender inequality.
In March 2017, Slovenia honored her by introducing "First Lady" wine, a red wine produced in the region near her hometown of Sevnica.

In February 2017, at a Florida rally, Melania Trump led the crowd in the recitation of Lord's Prayer. Later, during her and her husband's visit to Vatican City in May 2017, Trump revealed that she is a Catholic, the first Catholic to live in the White House since President John F. Kennedy and his wife Jackie over half a century earlier.