Be sure to see White House that Zweifel built 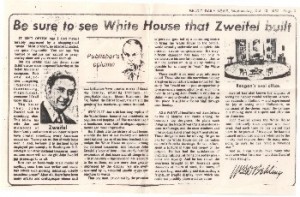 Be sure to see White House that Zweifel built

IT ISN'T OFTEN that I find myself terribly impressed by a shopping-mall "event." Most of them, no offense intended, are quite forgettable. You see one flea market or antique car exhibit or artsy-craftsy show and you've seen them all.

But the exhibit that has drawn some 15,000 visitor since it opened Saturday at the Beloit Mall is an exception! Pick an adjective....inspiring, impressive, fascinating, magnificent, awesome. It's all those things.

The house that John Zweifel built is something else. This fellow, his wile Jan and members of Zweifel their family and scores of volunteer helpers have created something every American should see Twenty-six million already have seen it. And, because it is destined to be displayed permanently in Washington D.C. amongst our other national treasures, many millions more will see the gift John Zweifel has presented to us all.

How can an hand-made scale model of anything coax from this writer and count-less others such glowing, admirieg, utterly boundless praise? After all, there have been many artists and craftspeople whose skill and brilliance have created works of dazzling beauty, amazing intricacy, describable charm. Mount Rushmore, the Taj Mahal, the Eiffel Tower, the art and the music of the masters...all come to mind.

WHY IS IT that a 130-foot-long replica of the White House, borne of our presidents, so beguiles and inspires us? The mansion itself is handsome, true. And its elegant Appointments are most impressive.

But I think it is the history of that house, wherein the fate of our country and indeed most nations has so often been touched, that makes the White House so special among our national treasures. And because John Zweifel's labor of love — the utterly faithful recreation of that house and all things in it - in mineature - has revealed this treasure to the millions, we are more than greatly impressed by the display. We are overwhelmed by it, rendered unable to put our reaction to words.

That one man, driven not by the promise of personal gain but by a consuming desire to bring the White House to the people, would actually undertake and complete this mission, strains comprehension. His magnificent obsession has been not only to demonstrate his love for his country ....but to stir the patriotism in us all by making it possible for so many to "visit" the White House.

There really is no need to go into more detail. Those who see this marvelous display are given informative brochures that tell the story. But I could not let pass an opportunity to express my appreciation to all who a hand to bringing John Zweifel's creation to Beloit - and to Zweifel for creating it in the first place. It will be at Beloit Mall through next Sunday.

AS A POINT of local Interest, Zweifel is a native of Monroe and ranks among the country's top designers. He plans such things as the State Street Christmas decorations in Chicago, and the show windows and interior displays of great department stores. These things he does for a living. He got no pay for the White House exhibit, he makes no profit from its showings. He has, in fact, spent a fortune in time and money on the project. He has had the satisfaction of inspiring millions; of being praised by presidents and royalty. And he has known the weariness brought on by thousands upon thousands of hours of work, the worry of transporting, assembling and dismantling a frightfully fragile display, upon which one could nut possibly place a dollar value.

Zweitel has also known the anguish of seeing the display vandalized by anti-American radicals in Holland - and experienced the joy of seeing other Hollanders, on command of the Queen, repair the damage in a moving show of respect and affection for America.

John Zweifel knows the White House more intimately than anyone who ever lived. And each time he has visited that place in the pursuit of his quest, he has felt himself surrounded and overwhelmed by the history that reposes there. On many occasions, he says, he has "shed a reverent tear."

And so, I can testify, have many who have seen what America — and John Zweifel — have wrought.