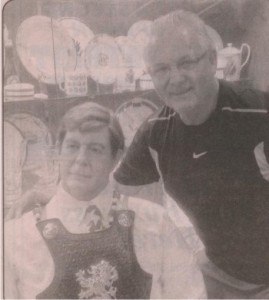 CLERMONT — Travelers can spot the Citrus Tower on U.S. 27 from miles away. Travel to the top of the tower and you will see for hundreds of miles. But if you look right down into the adjacent parking lot, you'll notice a white building labeled, "House of Presidents"

A mini replica of the Lincoln Memorial, Mt. Rushmore and Statue of Liberty stands on the side of the building. You'll also see a black 1973 Cadillac limousine in the lot. What you may not know is it was the Presidential limo used by Presidents Richard Nixon, Gerald Ford and Jimmy Carter.

The House of Presidents will amaze. It holds one of the largest collection of Presidential memorabilia in the USA. It is also the home to "The White House in Miniature," if you can call a perfectly exact 60-foot long and 20-foot wide replica a "miniature."

The display has traveled the world and has been to most of the Presidential libraries in America. It is the creation of two amaz-ing people, John and Jan Zweifel of Orlando. They have dedicated their lives to building and traveling the world with The White House in Miniature, telling thousands about the history of what they've named, "The People's House."

It took the Zweifels and their staff over 500,000 man hours and 42 years to build. And with the election of each new President they update the family living quarters and the Oval Office. Every President since Kennedy has allowed them exclusive entry into all the private rooms of the White House, where they take measurements and create exact replicas of every room, every painting, every piece of furniture. The small televisions actually work.

Prior to a visit to the museum, visitors may want to purchase a copy, via Amazon, of the book written by Gail Buckland with hundreds of photographs by Kathleen Culbert-Aguilar titled, "The White House in Miniature." Readers will learn and see first-hand how the Zweifel's built the replica and the history of its' travels around the world.

Upon entry to the museum guests pass through a gift shop with its thousands of White House items from cuff links, Christmas ornaments, books about the presidents, videos, DVD's, banners, clothing, bumper stickers, campaign pins, pens and something for everyone in the family to take home as a souvenir.

Included is a moving (literally) display of the White House being built. Full sized wax figures of all the Presidents dressed in the suits of their time let you see how they varied in stature. On display are gowns worn by the First Ladies at their husband's inauguration ball. A table setting for an official White House dinner is decked out with china. Visitors hear President Roosevelt giving one of his famous "Fireside Chats" and watch President Reagan delivering some of his humorous quips.

The Miniature White House display includes the current Oval Office of President Obama, but the replicas of the Oval Office of every President who resided there since Kennedy can be viewed to see how each Commander in Chief personalized the room.

Right: "The White House in Miniature by Gail Buckland with hundreds of photographs by Kathleen Culbert-Aguilar, is a must for anyone wanting to learn about the White House. The book details the fantastic story of the Zweifel family and how they built and travelled the world with an intricate and exact display of every nook and cranny of the White House.

The House of Presidents at 123 U.S. 27, Clermont has thousands more historical items related to the White House and the Presidency. It is open Monday through Saturday from 10 a.m. to 4 p.m. and Sundays from noon until 4 p.m. Group tours are available by calling 352-394-2836.

The House of Presidents is one of the many "Old Florida" roadside adventures not to be missed.

had one made of himself. This writer became good friends of the Zweifel's and managed a

three-week exhibit of the "massive" miniature White House in the Midwest.

You can look thru the windows to view the interior of a miniature replica of the Oval Office at the White House.

Hall of Presidents is at 123 U.S. 27, Clermont. The attraction is open seven days a week.