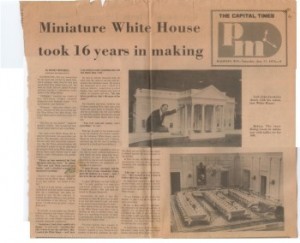 WASHINGTON—The way women lept for his hand and carried on about him, you'd suppose John Zweifel had just saved three little robins from a cat, but what he really did was spend 16 years putting together a miniature scale model of the White House.

"0HHhhhh," reported one viewer of this doll-house wonder recently displayed in the Kennedy Center, "it is just fabulous, just fabulous."

"Woooooo." said many others, tenderly, although all they were seeing was the Blue Room, the Red. Room, the Green Room and so forth on a scale of 1 to 12.

"Did they let you inside?" inquired another viewer, who wondered how Zweifel knew where to put everything.

The truth is the White House did in-deed let him inside, but sometimes just barely. The Kennedy administration, Zweifel said, was somewhat cooperative, but the Nixon administration did not think it proper to let an individual do research work in the White House, so during those years Zweifel had to just look at a chair, then hastily trot outside to sketch it.

"Please say how wonderful the Ford Administration has been," he added. "They just said 'Help yourself to a ladder' and I climbed around measured everything."

Zweifel is what some might call crackers for the White House, which he is not past calling "our house of history."

To him, it is not merely a reasonable imitation of an Irish country house suitable for a gentleman, and often occupied by one. On the contrary, to Zweifel the White House is holy ground, "the backbone of our history," as he puts it. "It still gives me chills" even to think of it.

"Sometimes I work three months on a display," he said sadly, "and then they take it down in one day and that's that. I wanted the White House - well, here, I am trying to make something that will last longer than I will."

He had no outside financial help, he said, over the years of carving and furnishing the miniature house. He figures the materials on it cost a third of a million dollars. Asked how a store display man could manage that kind of outlay, he laughed and said. "My wife drives an old car, that's the name of the game."

The Zweifels and their children (six of them, counting little Julie just a few weeks old, back home in Orlando, Fla.) and the craftsmen who did such things as spend 3 1/2 months blowing the crystal for the State Dining Room, have a saying: "You tell yourself money isn't everything," he said.

Thus far, he said, he has found no one to pay for printing the leaflets explaining the miniature White House, and he thinks he will be doing well if display contracts pay for the cost of hauling it around in a truck and assembling it.

Each light globe (miniatures such as you find on some medical instruments used inside the body) takes four hours to replace, he said. Every time the structure is moved and reassembled, it has to be checked and repainted, and moving is a nightmare.

"I spent 16 years, you know, and the idea of that crystal chandelier riding down the highway in a truck - well, I like to be the one driving the truck.

"I spent 190 hours on that little table," he said, pointing to a copy of a rosewood giddiness acquired by President Lincoln's wife, and later admired by Eleanor Roosevelt.

Sometimes, he said, it was discouraging to make 40 chair legs in order to get four that worked right; and often it was hard to keep furniture straight - a chair known from an old photograph in one White House room had a way of showing up later in another room, and there is a marvelous scarcity, he said, of photographs showing such details as the legs of a Cabinet table.

"Pictures always have people in them" he said, blocking the details Zweifel wanted to see. Despite the number of pictures available, he said, the thing you are on fire to know about is always against the wall not shown in the picture.

At first, he said, the White house kept questioning him on things such as financing and exhibition with dignity and so forth.

"Like you," he said a trife sorrowfully, "they seemed to find it hard to believe there was no angle."

He made scale models of a room, then another room, and it seemed to Zweifel it never was the right time for any great institution to sponsor his miniature White House.

He has no idea where "to enshrine" the miniature for future generations to admire, but no doubt the Lord will provide in due time. If you still marvel that a man would spend any considerable labor to recreate the White House in miniature, you have to admit that Zweifel has one great point:

"It would have been easier to make it full-sized. I often think. But who wants another life-sized White House?