The White House is Coming to Nashville 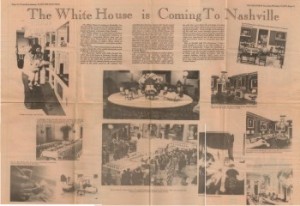 The White House is Coming to Nashville

The White House is coming to Nashville. Not the real thing, of course, but the closest thing to it that can be made to travel, and the life-long dream of master craftsman John Zweifel.

The White House is a one-inch-to-one-foot scale model of the presidential residence in Washington, measuring 60-feet long and so exact that State Dining Room table is set with 120 place settings of replica china, made of porcelain and hand painted...each plate smaller than a dime.

The Traveler's Rest Association is sponsoring a visit to Nashville of the exhibit during the week of March 1 through April 6.

The Westview talked with John Zweifel the other day at his home in Orlando, Florida, and he told us the building of the replica began with an idea in his mind that started coming into reality in 1961. We talked of hand-carved chairs, made of the same wood as the original, but standing less than four inches tall...but he urged that we not stress the miniature craftsmanship which went into the project, but rather the fact that this is a replica of the White House, the foundation of so much American History that actually being there fills one with a quiet awe.

This awe is what Zweifel felt when he toured the White House in 1956, and saw the five rooms allowed to the public an tour. An internationally acclaimed historian, sculptor and fine artist, John Zweifel has furnished original animated displays to leading museums around the world, and was given the title "King of the Miniaturists" by Walt Disney.

But the White House display is a labor of love. The problems of making hundreds of photographs of each room of the White House, countless sketches and floor plans are explained in a 16 page booklet which will be available at the Traveler's Rest exhibit. He and his wife, Jan, were given the privelege of seeing rooms of the White House never before seen by the general public. They actually took paintings off the wall and went through closets in their efforts to learn more and to exactly reproduce each and every thing in the building. Tables and chairs are reproduced out of the exact wood, and are correct down to scratches and cigar burns. But as Zweifel told The Westview, "I don't want people to come to see this exhibit as a work of a miniaturist. I hope the teachers of every class in the area's schools will bring their students to see this in order to inspire every one of them with the feeling of history that the original building inspires. And I want every student to leave the exhibit with the feeling that he or she could someday be the president of the United States."