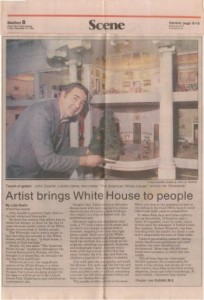 John Zweifel is patriotic right down to his red, white and blue socks.

He loves the country that allows him to create his dreams, to show for the last 14 years his scale-model replica of the White House to more than 41 million people.

The Wisconsin native wants people to feel that they are actually in the White House, which, he says, "is their house, a symbol of their heritage.

" Zweifel, 50, has taken "The American White House" exhibition throughout the United States and in Europe, and has brought it to Green Bay on virtually the last leg of its world tour.

When it's all over, the magnificent replica of the White House - a three-dimensional display from Washington to Reagan that is is an on-going project for the ages will be given to the United States Park Department and exhibited on a permanent site.

Imagine this. Table service in the state dining room with inch-long knives, plates about the size of a nickel, each holding a tiny napkin in a ring embossed with the presidential seal.

Miniature lights and telephones that work, a TV with a square-inch screen and on which you change channels with a tweezers, carpeting with even the cigar burns copied. Each room of the White House has been duplicated, furnishings hand-carved from the same woods as the originals, paintings reproduced, draperies and bedspreads copied. It is not only a work of art but a work love that has taken Zweifel, his wife, Jan, and their six children a quarter of a century to perfect.

The guards on duty shiver in the snow.

When you look at the presidential seal on the ceiling in the Oval Office, keep in mind that it was eight years in preparation.

It takes three days and three nights to put up the exhibit, 18 hours to take it down. It is packed, room by room, into a 40-foot semi for transport. A former Green Bay resident, Robert Wherrett, has been traveling with the exhibit for about a year and is responsbile for some of these tasks.

Years of painstaking research, during which Zweifel met presidents and their families, has been compiled and documented. More than 400,000 man-hours were necessary to build this rare model.

"It's all been done by volunteers," Zweifel explains. He is responsible for much of the carving, but people all over the country have been involved in sewing draperies, linens and other furnishings. At each exhibit, volunteers help answer

❑ Exhibit
visitors' questions. The Wiscon-sin Telephone Pioneers will do that job in Green Bay. The exhibit opens today at the Green Bay Expo Centre and remains through Dec. 22.

The exhibit spans 60 feet, one-twelfth of the size of the White House, which is the length of three football fields. He says there is no way to assess the monetary value of the exhibit. It's priceless, he says, as is the heritage it depicts.

Zweifel, a native of Monroe, said it is there that as a child, his carving skills were encouraged by his grandmother and great-grandmother. "They would tell me to carve an experience," he says. His first major works are on display at the Circus Museum in Baraboo. The artist now lives in Florida.

Zweifel started his research during the Kennedy administration, often visiting the White House to do his work. Early in the Johnson administration, his visits were fewer because of tightened security after Kennedy's assassination.

"And Nixon couldn't visualize the impact an exhibit of this stature could have," he says.

President Ford was his strongest supporter among recent presidents, and is "The exhibit's honorary everything.

" Zweifel took the White House replica to the Netherlands in 1982 to help celebrate the Netherlands-American Bicentennial in Holland. During one night of the exhibit, terrorists broke in to the exhibition hall and damaged much of the structure and its contents in an attempt to "Destroy America." Queen Beatrix immediately summoned her artisans and craftsmen to repair the damage.

For this particular exhibit, the White House is decorated for the holidays and the exhibition includes displays and other presidential memorabilia to savor.

The exhibit will be at the Green Bay Expo Centre through Dec. 22. Admission is $3.50 for adults, $2.50 for senior citizens and children ages 5 to 12. Children under 5 are admitted free. The exhibit is sponsored by Fort Howard Paper Company. Hours are from 9 a.m. to 9 p.m.