Creating his ultimate work - one piece at a time 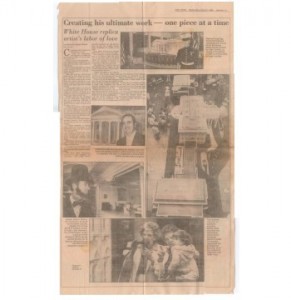 Then, her great-grand-child devised a scheme: He opened the invalid's world by illustrating his own.

Not yet school age when his artistic streak surfaced, Zweifel went on to create the showcase of a lifetime —piece by piece.

Today, that creation, a 60-foot-long replica of the White House, is exhibited at Hawthorn Center in Vernon Hills. The White House at the Vernon Hills mall, Routes 60 and 45, is expected to draw a half million people during mall hours this week through Sunday.

A companion exhibit is an array of presidential paraphernalia, from an actual presidential limousine to a painting of John and Jacqueline Kennedy on the head of a stick pin.

TAKING ITS last tour of Illinois ever, the exhibit that began in 1961 will be permanently stationed in Washington, D.C. next year. It's next and last Illinois stop is in Joliet from May 23 to June 1.

A labor of 25 years of the Evanston-reared designer and his family, the mansion duplicates the history of  the 162-year-old home, down to the working quarter-inch television in the President's study to a miniature telephone that really rings.

It displays 10,000 miniature pieces, including furniture hand carved by Zweifel and his wife Jan, an interior designer.

It features hundreds of working lights, from the chandeliers to the hand-blown lamps and light switches that turn on and off.

It includes a presidential study with a television, golf clubs, an exercise bicycle and weights. Else-where, it includes miniature jelly beans.

THE RUGS took five years to sew, with as many as a quarter-million stitches, Zweifel said.

The draperies and wallpaper in the White House replica are actual leftovers from the real mansion's remodeling.

Zweifel's assistant who, like Zweifel, went for two days straight without sleep assembling the exhibit at the mall.

Each piece, delicate and wrapped individually, was carefully arranged.

The miniature mansion, reportedly seen by 43 billion people and taken over 175,000 miles since its unveiling during the country's bicentennial in 1976, was damaged in Holland on Good Friday, 1982, the owner said.

Anti-American terrorists burst in and sprayed paint stripper on the Zweifel creation, destroying the miniature paintings and more.

"THEY WANTED to see America crushed," said Zweifel, adding that workers are still repairing the dam-age and recreating the paintings.

Financed by the Zweifels and sponsors who pay to bring the exhibit to their towns, the mansion is the work of some 1,000 volunteers and the Zweifels, including the couple's six children, ages 10 to 25 years old.

Family is still essential to the creator, decades after the little boy created a way outside the four walls that closed in on his great grandmother.

"I was always trying to create things to show her vicariously," said Zweifel, who went on to design everything from Marshall Field Christmas decorations to animations for Walt Disney Productions to a miniature reproduction of Hugh Hefner'a bedroom.

Zweifel, born in a family of artists, was only three years old when he started his wok on a Wisconsin farm before moving to Evanston and years later to Florida.

As a boy, he was urged to continue by his grandmother, Zweifel said. There was another factor that spurred the youngster's artistry.

Zweifel revealed, "We didn't have television then."

Zweifel proudly stands before his largest and most time-consuming creation, which took him 25 years to complete. His work is expected to draw a half-million people before closing.

Above, Robert Wilton, 52, of Antioch, dressed as Abraham Lincoln, studies the minute detail of Zweifel's work. At right, Lynn Swanson, 75, of Waukegan, snaps a picture of the miniature White House as Sue Ernest, 32 of Vernon Hills points out the work to her daughter Carolyn, 3.

The massive overview of Zweifel's creation, above, does not show the meticulous detail that is exhibited within its walls. The exhibit duplicates the presidential mansion down to a miniature telephone that really rings.