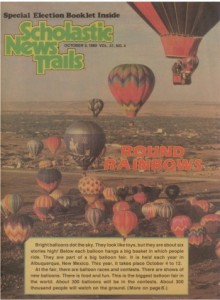 It took about 15 years to plan and build the model. Now it is sent from city to city all over the U.S. People who cannot visit the real White House can see the little one instead.

This year, the model completed its travel to all 50 states. In honor of this happening, the President came to the opening of the show when the little White House arrived in Washington, D.C.

P.S. #1: A big poster showing the White House is in your teacher's News Trails.

P.S. #2: A book about Presidents is in the center four pages of News Trails. You can make the book by following the directions. Fold pages where it says "fold here." Cut where it says "cut here."

Is this a giant? No, it's a child touching a tiny chair in a room of the mini White House.

One side of the model is open so that people can look in and see the rooms.

Independent—Say: in-dih-PEN-dent. This can be a person who does not belong to any special group of voters.

Transportation—Say: tranz-por-TAY-shun. This means ways of traveling from place to place.

candidate—Say: KAN-dih-date. This is a person running in an election.

campaign—Say: kam-PANE. This is the work done to try to get someone elected. It can be making speeches, sending out posters, being on TV, and so on.