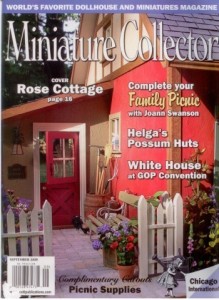 Thousands of Republican delegates are flocking to Minneapolis over the Labor Day weekend to nominate their candidate for President. Meanwhile, the object of that candidate's desire, The White House, is close by, in miniature. The latest version of The White House in Miniature will be on exhibit at the Minneapolis Convention Center during Civic Fest, August 29 through September 4.

Jan and John Zweifel began building the replica in 1962, and they work continuously to change its interior with each new administration.

"We enjoyed Laura (Bush)'s cat when we visited the White House (earlier this year) while the Bushes were in Africa. We could see every room to make sure every detail was correct," John said. "We have the right names on the books, added flat screen TVs and jigsaw puzzles Laura was working on, and

Jan and John created current holiday decorations in the miniature based on what they saw last winter. By the invitation of First Families, John and Jan have. been recording the changes in The White House since the Kennedy administration.

Jan Zweifel pauses in the second floor hallway of The White House. In three days. Jan and John shot about 1.000 research photos.

Payton Bittick, one of the Zweifels' 12 grandchildren, -"helps install" a display in this 2004 photograph. (Each grandchild has a shirt that says "I'm a Zweifel miniature.")

noted how they changed the bedrooms so (the bedrooms) would be more comfortable for (former President) George and Barbara Bush. We were included in Christmas events so we could duplicate what they did for the holiday. We're so appreciative of the Bushes and all the previous administrations for allowing us access to the White House."

The miniature White House tours the United States and for-eign countries when it's not on exhibit at the Presidents' Hall of Fame in Clermont, Florida. Unlike other famed miniature structures, it is constantly updated. "It's different from any other dollhouse because it's past, present and future," John said.

"We've added 30 rooms since it was displayed at the (Gerald R.) Ford Museum (in 1999)—a West Wing and East Wing and a whole second floor." Working televisions and computers, a freezer that exudes cold air, and running water are part of the magic of the experience.

Rooms from the mansion slide out like drawers so the Zweifels and a cadre of family members and other volunteers can make changes. "We totally redid the Lincoln bedroom, sitting room and Green Room," John said of recent changes. Parts of former incarnations of the rooms are saved for future exhibitions, and each Oval Office becomes part of permanent and traveling displays.

At Civic Fest in downtown Minneapolis, the 60- by 20-foot miniature White House will share space with full-size State Dining Room table and Oval Office replicas, several miniature Oval Offices, archival materials from all 43 presidents and presidential limousines gathered by the Zweifels. Approximately 40 Minneapolis-area volunteers are expected to help the Zweifels set up their displays.

"We look forward to guests from all walks of life across this great country attending such an epic event," John said by way of inviting everyone to visit what he often calls "The People's House." ■

For a 2008-09 schedule of other venues for The White House in Miniature, see the "Exhibit Calendar" in this issue.

Susan Baker and Jan Zweifel are making bedcoverings for the new miniature Lincoln bed on their work table. The miniature White House is in the background.

John sculpts a new crown to replicate one that has just been added to the full-size Lincoln bed. Blue tape protects the newly carved surfaces.

The new bed is installed in the miniature Lincoln Bedroom.