*New at the White House 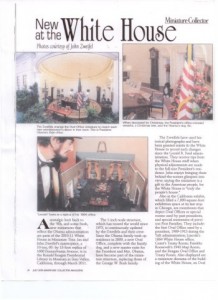 The Zweifels change the Oval Office miniature to match each new administration's decor in that room. This is President Obama's Oval office.

When decorated for Christmas. the Presidents office included wreaths, a Christmas tree. and the Obama's dog. Bo.

A nostalgic look back to the '60s, and some fresh, new miniatures that reflect the Obama administration are parts of the 2010-11 White House in Miniature Tour. Jan and John Zweifel's masterpiece, a 10-ton, 60- by 13-foot replica of 1600 Pennsylvania Avenue, is in the Ronald Reagan Presidential Library in Museum in Simi Valley, California, through March 2011.

The 1-inch-scale structure, which has toured the world since 1975, is continuously updated by the Zweifels and their crew. Since the Obama family took up residence in 2009, a new Oval Office, complete with the family dog, and a new master suite for the President and Mrs. Obama, have become part of the minia-ture structure, replacing those of the George W. Bush family.

The Zweifels have used historical photographs and have been granted entrée to the White House to record such changes since the Gerald R. Ford administration. They receive tips from the White House staff when physical adjustments are made to the full-size President's residence. John enjoys bringing these behind-the-scenes glimpses into view, saying the miniature is a gift to the American people, for the White House is 'truly the people's house."

Also in the California exhibit, which filled a 7,000-square-foot exhibition space at its last stop in Chicago, are roomboxes that depict Oval Offices or special rooms used by past presidents, and special mementos of previous First Families. They include: the first Oval Office used by a president, 1909-1913 during the Taft administration; Lincoln's 1864 White House office; Grant's Treaty Room; Franklin Roosevelt's 1943 Map Room; and the Reagan Oval Office and Treaty Room. Also displayed are a miniature diorama of the build-ing of the White House, an Oval

In the 1960s. this is what Caroline Kennedy's White House bedroom looked like.

Office under construction to help guests grasp the detail, crafts-manship and art of miniatures, and tools used for miniature construction.

Full-size samples of White House dinnerware and banners featuring former First Ladies and Presidents enriched the exhibit hall when the display was mounted at the Museum of Science and Industry in 2009-10. New for this continuing tour is a roombox of 3-year-old Caroline Kennedy's bedroom, replete with "Raggedy Ann" dolls and a table set for a tea party. Framed photographs of President John F. Kennedy with young John-John, and a separate photo of Jacqueline Kennedy stand on the 1-inch scale dresser.

The White House in Miniature has been a life's work for John, Jan, their children and a host of talented artisans since 1962. Their legacy is written in minia-ture as the structure approaches its 50th anniversary. ■

The Obamas borrowed modern art for their private residence in the White House. and the miniature reflects their choices.

Jan and John Zweifel pose in front of the miniature White House.