*A little Washington comes to Monroe 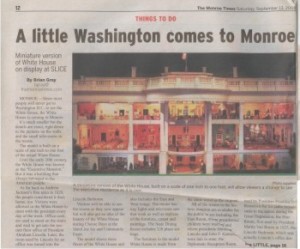 A little Washington comes to Monroe
Miniature version of White House on display at SLICE
By Brian Gray bgray@ themonroetimes.com

It's much smaller but the details are exact, right down to the pictures on the walls and the small televisions in the rooms.

The model is built on a scale of one inch to one foot of the actual White House. Until the early 20th century, the White House was known as the "Executive Mansion." But it was a building that always belonged to the American people.

As far back as Andrew Jackson's first term in 1829, the people considered it their home, too. Visitors were allowed in the White House to meet with the president every day of the week. Office-seekers used to stand on the stairs and wait to get into the second floor office of President Abraham Lincoln. Later, the room used by Lincoln for an office was turned into the Lincoln Bedroom.

Photo supplied A miniature version of the White House, built on a scale of one inch to one foot, will allow viewers a chance to see the executive residence as it is now

Visitors will be able to see the rooms as they now appear but will also get an idea of the' history of the White House during Cheese Days at the StateLine Ice and Community Expo.

The model shows three floors of the White House and also includes the East and West wings. The model has tiny lights and television sets that work as well as replicas of the furniture, carpet and paintings. The State Dining Room includes 120 place settings.

The furniture in the model White House is made from the same wood as the original. All of the rooms in the historic mansion are available for the public to see including the East Room, where presidential children were married and where presidents Abraham Lincoln and John F. Kennedy, were lain in state; the Diplomatic Reception Room,
used by President Franklin D Roosevelt for his radio broadcasts to the nation during the Great Depression; the Blue Room, first used by President Martin Van Buren in 1837; the Lincoln Bedroom, which was actually Lincoln's office dur-

ing the Civil War and includes a replica of the Rosewood bed and table purchased by Mary Todd Lincoln; and the State Dining Room.

More than 40 million people in all 50 states and in countries around the world have been able to see the model White House.

The miniature White House was built by one-time Monroe resident John Zweifel and his wife Jan. They first began construction of the building in 1962.

Jack Kundert, Monroe, who is helping to bring the replica to Monroe, said the Zweifels have been given opportunities to visit the White House often to make sure the model stays current.

With each new administration, there are changes made to paintings and furniture to the actual white House. The Zweifels make the same changes to their model. The Zweifels spent more than 600,000 hours to recreate ' the White House model, which weighs about 10 tons.