Honey, I shrunk the White House 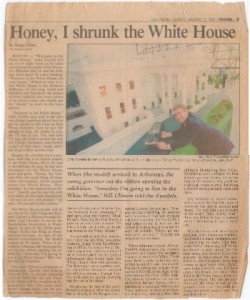 Honey, I shrunk the White House
By Margo Miller The Boston Globe

BOSTON — "Welcome to the White House," John Zweifel will say six or eight times as he takes you around the model of the Executive Mansion that he and his wife, Jan, have spent 30 years building. "Welcome to the White House, it's your house." Whatever else it is, this White House is the ultimate dollhouse, 60 feet long, wired and plumbed and furnished, the dream of every hobbyist and every owner of an electric train who finally got the "smoke" to work in the locomotive.

"Welcome to the White House," John Zweifel says, and in the process dodges questions about how he got his smoke to loft from an East Wing chimney, how he got the phones to ring, the clocks to tick, the TV sets to run. Yes, real little TV sets, one with a screen the size of a Chiclet. Showmen, and Zweifel is part of that merry band, don't like to give their secrets away.

Besides, the Zweifels have a mission. And that is to restore respect to the White House. He is 56, and in his lifetime, he says, he has seen disrespect for the White House grow and grow. "Korea, the Vietnam War, the racial thing, all these other movements, where people blame the White House. They shouldn't. It's the symbol of our liberty." Zweifel says he and his wife have done all the work themselves. "All out of our own pocket," he says. "It's our gift to the country."

The White House model will be on view at the John Fitzgerald Kennedy Library in Boston through October. Last October, it was at the Smithsonian Institution in Washington, as part of the 200th anniversary of the real thing on Pennsylvania Avenue. As part of the nation's bicentennial, the model toured all 50 states. When it arrived in Arkansas, the young governor cut the ribbon opening the exhibition. "Someday I'm going to live in the White House," Bill Clinton told the Zweifels.

Now that Clinton's prediction is coming true, Zweifel, who lives in Orlando. Fla., is already planning an Oval Office for the new President, which will be revealed on Inauguration Day. The room itself doesn't change much, just the personal mementos. Millie and her dog basket will disappear.

John Zweifel tinkers with a toy limousine at the scale-mode

What is Clinton bringing from Arkansas? "I can't give away my secrets," Zweifel says. Redoing the first family's private rooms takes longer: "It takes at least six months to do the real rooms in the White House."

Five presidents and their families have seen the Zweifels' awesome creation, begun when Eisenhower was in office. No one on Ike or Mamie's respective staffs was helpful when Zweifel asked for the kind of information that would make his White House interiors accurate. The Kennedys were another matter. Jacqueline Kennedy assigned one of her secretaries, Pamela Tenure, to the project, and the Zweifels had the run of the place.

Reagan was the best of the presidential tour guides, when the model was on display at the Reagan Presidential Library, Reagan notices everything. He pointed out a doorknob that was missing when we repainted the Oval office and forgot to put it back on. Hetold us he kept a bag of nuts for the squirrels outside. `Where are my squirrels?' he said.' " Zweifel has remedied the omission.

When administrations change, Zweifel redecorates the Family Quarters and makes the necessary changes in the Oval Office. President Bush's only criticism concerned his attache case. Jan Zweifel had put it almost out of sight. Bush moved it himself, to the right of the table behind his Oval Office desk. The Family Quarters are on the third floor. Barbara Bush's office is papered in a coral and white print. Their bedroom is starry with flowers. The living room is yellow with
cabinets displaying fine china. Zweifel has even outfitted the first family's private kitchen. It's on the front of the building, and you'll see it through windows that, this being a Zweife! model, actually open, and close.

Any hobbyist or model maker will recognize the Zweifels' store of materials that can be molded and baked. "My wife had a set of chairs in the oven," John recalls, "and I think my father-in-law wondered when I was going to get a 'real' job."

The scale is an inch to a foot; a reducing color photocopier allows Jan Zweifel to make wallpapers and oil paintings to scale. One day, every White House rug will be reproduced in petit point; for the time being, Jan Zweifel paints the patterns on finest plush. She also paints in discolorations, from dog messes to cigar burns. Amy Carter, says John Zweifel, was his best source for details like that. "She lived in the White House in her inquisitive years. She was an only child and she liked to talk to the guards a lot, and they told her things we would never know. We put them all in."