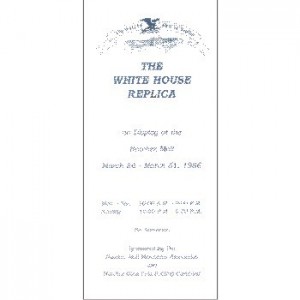 THE WHITE HOUSE REPLICA
The White House belongs to the people. For this reason, John Zweifel, his wife Jan, and a team of talented artisans and craftsmen have spent over 400,000 hours and more than $500,000 in materials to design The White House, in replica, which every American can share.

The 60-foot long White House Replica is the only hand-carved authentic scale reproduction of the Presidential residence as it appeared on July 4, 1976. Every detail is so authentic that the telephones ring, quarter-inch televi-sion sets work, clocks keep time and hundreds of tiny lights from the crystal chandeliers, hand blown lamps and light switches turn on and off.

The Zweifels and their volunteers first began the project during the Kennedy administration in 1960, accumulating and researching documents, examining floor plans of rooms that most people had ever seen on White House tours and scrutinizing photographs for the minute details.

Every attempt has been made to provide an historically accurate model of The White House. The hand-carved furniture is constructed only of the same woods as the originals, paintings have been matched for exact colors and textures, drapes and bedspreads are duplicated to the exact number of tassles as the originals.

The White House Replica was presented to President and Mrs. Ford in December, 1975, at the "Pageant of Peace" and then received official national recognition by the American Bicentennial Administration. It was introduced into the U.S. Congressional Records in 1980, been honored with over 150 "Keys to the City, " official recognition and proclamations from governors from all states, honorary citizenships and an honorary award by Queen Beatrix of the Netherlands when in Holland for the American-Netherlands Bicentennial.

The exhibit is not just a July 4, 1976 replica but features artifacts and displays from Washington to Reagan. New this year is The Blue Room at Christmastime, with snow falling outside the windows and hundreds of lights and ornaments on the tree exactly as it look-ed last year. The oval offices display shows the style of each President so you are able to compare Kennedy's with President Reagan's Oval Office as it looked July 4, 1984. After passing by Ford's office you can smell the fragrance of the flowers in the Rose Garden and there is continually much more to come.

Following the extensive 50 state tour of the United States, the American White House Replica will begin a worldwide good will tour, for the purpose of fostering a greater under-standing of what the White House means to the American people. Then, at last, it will come to rest at a permanent and appropriate exhibition site, a lasting display of our House of History. And one hundred years from now, in the Tricentennial Era, Americans will still stand before the American White House Replica in the same amazement as that of their predecessors. And each American who views it, whether in the cool, careful eye of research or in the warm, misty gaze of reverence, will be touched by the dream of its creator. And moved, as he intended, to a deeper understanding of the magnificent residence we chose to call, simply, the White House.