Few people can say they've dined at the White House 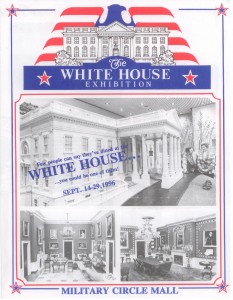 Few people can say they've dined at the White House

President Ford checking his Oval Office as it appeared on July 4, 1976.

ONE MANS DREAM
For John Zweifel, a dream of twenty-five years, a dream to create an authentic replica of The White House as a gift to his country, was realized on December 18, 1975. On this date, the Zweifels unveiled the hand carved White House Replica for President and Mrs. Gerald Ford at the "Pageant of Peace."

Years of painstaking research, compiled and documented, preceded the over 400,000 man- hours necessary to build this rare model. Solid white columns, the gleaming facade and the splendid porticos of the White House are now captured -for the first time in a genuine reproduction. Spanning over 60 feet, from its east to west wing, every detail of the stately mansion is faithfully recreated on a one inch to one foot scale.

The Zweifels first began this enormous project during the Kennedy Administration in 1961. Rooms never before seen

Creator John Zweifel carefully checks the authenticity and detail of the actual furnishings with the reproduction.

by the public were included in their plans. This one-of-a-kind hand-carved scale reproduction of The White House has been frozen in time and represents the Executive Mansion as it stood on July 4, 1976, during the Ford Administration. Hand-carved furniture was constructed from the same woods used in the original pieces. Every tiny painting matches the exact colors and textures of the original works. Drapes and bedspreads are duplicated down to the last tassel. Even more incredible are telephones that ring, quarter inch televisions that work, miniature clocks that keep time, hundreds of tiny lights that illuminate delicate chandeliers, wall switches that turn on and off, chimneys

The Lincoln Bedroom-exact reproduction from the hand- carved rosewood table and bed to the bedspread duplicated down to the last tassel.

The Carters visiting the replica in honor of its 50 state tour.

puffing white smoke and the fragrant smell of the Rose Garden. The John Zweifel family has been creating exhibits and displays for over thirty-five years with major works for Walt Disney Productions, General Motors, Fisher-Price Toys, Ford Motors and many other national clients. John, a Florida artist, designer, historian and nationally known "King of the Miniatures", their wife, Jan, an interior designer, his six children and a team of talented craftsmen from throughout the country, have created a dream. Their labor of love, to create a better understanding of The White House and our presidents who have lived there, has been shared by thousands of Americans in all fifty states. The materials and tour expenses have exceeded over a million dollars not including any expenses for labor. More than 41 million people have viewed the exhibition in the United States and Europe, creating a deeper love and greater understanding of The White House. Across the country, lines and crowds have equaled those for King Tut and the Bicentennial Freedom Train. The Wichita Beacon reported after an appearance there, "It was the biggest attraction to hit Wichita since Charles Lindbergh flew in more than 50 years ago ... The wait was 5 hours?'

The White House Replica was created as a gift to the American people, in the spirit that The White House belongs to all the people. It is certain to create a better understanding and to instill immense pride in our rich American heritage.

Decorated in American Empire style with delicate chandeliers that turn on and off.

Jan Zweifel places the Federal style chair in The Green-Room, detailed illuminate and wall switches that
so precise that you almost feel you were there.

* THE AMERICAN WHITE HOUSE IN ALL ITS ELEGANT *

Her Majesty Queen Beatrix of The Netherlands opens the exhibit for the 200th year celebration between Holland and America.

No other exhibit of this magnitude has toured all 50 states, including Alaska, Hawaii and Europe.

WORLD TOUR -taking The White House to the people. In recent years, The White House Replica has toured all fifty states and has been honored with more than 150 "Keys to the City" as well as official recognition by the governors of every state. In 1982, the exhibit was flown to Europe via KLM airlines and sponsored by American Express to help celebrate the Netherland-American Bicentennial in Holland. On June 8, 1982, Her Majesty Queen Beatrix of the Netherlands appointed John Zweifel Officer in the Order of Orange Nassau for his outstanding contribution to the country.

Following the Holland showing, the display was shipped to London for a special exhibition for Queen Elizabeth's Royal Tournament in Earl's Court. Members of the Royal Family, Dignitaries and thousands of Britians had the opportunity to view the exhibit.

The replica has been seen by millions of people on TVs That's Incredible, The Today Show, P.M. Magazine, major magazines, Sunday Sections and front pages in the U.S. and Europe.

The exhibition represents over twenty-five years of painstaking research and construction and includes such minute details as pencils, pens, cigar burns, gravy stains and extention cords.

Following the extensive tour, it will come to rest at a permanent and appropriate exhibition site, a lasting display for generations to come. And each person who views it, whether in the cool, careful eye of research or in the warm, misty gaze of reverence, will be touched by the dream of its creator. And moved, as he intended, to a deeper understanding of the magnificient residence we chose to call, simply, The White House. It includes displays from Washington to Reagan, of the past to the present and is an on going project for the ages.

Spanning over 60' from east to west wing, the 35 major sections and thousands of intricate pieces are transported in a 40' semi across the nation.

Taking the White House to all the people by land, sea and air.