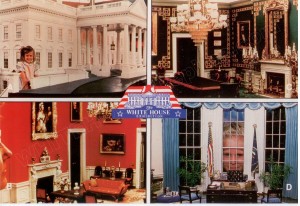 A large scale replica of The White House, including its authentic furnishings, as it appears today. Measuring 60 feet long by 20 feet wide, it is a one-inch to one-foot scale replica and took over 600,000 hours of labor during the last 32 years.

It was created by John and Jan Zweifel, family and volunteers as a "Gift to the people from the people".

Since the world tour began in 1975, it has appeared in over 350 showings, traveling many thousands of miles and viewed by over 42 million people, featured in such places as the Reagan Library, Smithsonian Institution and the Kennedy Library.

A - Looking over the North entrance White House Replica

D - Looking in at President Bush Oval Office with Millie