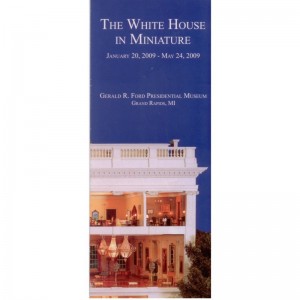 ITS HISTORIC FURNISHINGS AND FIRST FAMILIES

by Walter Scheib and Andrew Friedman

As the chef for both the Clintons and George W. Bush, Walter Scheib offers a rare perspective into the workings of the Executive Mansion, state visits and even the private meals of the First Family.

THE WHITE HOUSE STAFF: INSIDE THE WEST WING AND BEYOND

Spending 14 years on the staffs of Presidents Eisenhower. Nixon and Ford, Patterson offers up a rare insight as to how the inner workings in the White House affected policy both domestically and internationally.

AMERICA'S FIRST FAMILIES: AN INSIDE VIEW OF 200 YEARS OF PRIVATE LIFE IN THE WHITE HOUSE

Anthony Presidential historian Carl Anthony traces the history of all the First Families (beginning with John and Abigail Adams) and their lives in the White House.

THE PRESIDENT'S HOUSE: 1800 TO THE PRESENT

This is an informative and entertaining history of our nation's house told through the accounts of those who occupied it. (2003)

These titles and many more are available ai the Grand Rapids Public Library.

FIRST KIDS: THE TRUE STORIES OF ALL THE PRESIDENTS' CHILDREN

by Noah McCullough A fact-filled book about the youngest residents of the White House by 13 year old presidential history buff Noah McCullough. (2008)

FIRST CHILDREN: GROWING UP IN THE WHITE HOUSE

Anecdotes from the lives of children who have lived in the White House from the time of George Washington to the present. (1996)

A KID'S GUIDE TO THE WHITE HOUSE

by Betty Debnam Find out how the White House was built, and meet the first families and pets that have lived there. Take a tour of the public rooms and visit the big backyard. (1997)

OUR WHITE HOUSE: LOOKING IN, LOOKING OUT

More than one hundred leading authors and illustrators donate their talents to a collection of essays, personal accounts, historical fiction, and poetry which looks at America's history through the prism of the White House. (2008)

THE WHITE HOUSE: AN ILLUSTRATED HISTORY

Explores the history, architecture, and symbolism of the White House. which serves as a museum, office, ceremonial site, and a home to presidents and their families. (2003)

Arthur's essay wins a contest and he has to read it to the President in a special ceremony at the White House. (1991)

A little girl imagines what her day would be like if she were President of the United States. (2008)

Additional titles for both adults and children are available at our Admissions Counter and on our web site: nwm.geralelfordlibrarymuseum.gov

Names aside, this historic house means many things to Americans. It symbolizes the seat of our federal government, even democracy itself. It is a place which has evolved over the centuries to suit current need and the personalities of the families who have occupied it, becoming a beautiful site appropriate for day to day work, meetings of substance, as well as the pomp and ceremony surrounding the presidency. It is home to our presidents, and beginning this year, home to the first young children since Amy Carter, with the Obamas' arrival on January 20,2009. And, it is the "People's House." It belongs to us as a nation ... and it is open to us.

Thanks to John and Jan Zweifel, we don't need to travel all the way to Washington, D.C. to see our historic house. The White House in Miniature brings it to us, in incredibly rich detail. This 1 inch to 1 foot scale model took the Zweifel family, as well as thousands of volunteers, several hundred thousand hours to research and create with remarkable accuracy in architectural detail, design, and decoration.

This labor of love now travels around the United States for all to view and enjoy. It will be on display here at the Gerald R. Ford Presidential Museum through May 24,2009, with many accompanying programs. Watch our web site, geraldfordlibrarymuseum.gov, for program details.

To learn more about the White House, visit these web sites: