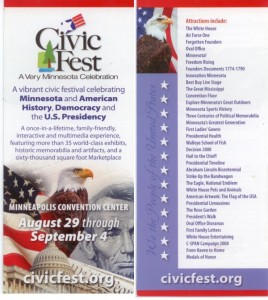 historic memorabilia and artifacts, and a

Strike Up the Bandwagon

The Flag of the USA

From Haven to Home

A unique 60'X 20' detailed re-creation of the White House and its contents, previously exhibited at the Smithsonian Institution and Presidential Libraries.

Visitors tour a full-scale replica of the fuselage of Air Force One and will have a keepsake photo opportunity.

A replica of the White House Oval Office; visitors sit behind the President's desk, sign a bill into law and will have a souvenir photo opportunity.

A unique multimedia presentation developed by the National Constitution Center in Philadelphia. Visitors learn the story of the Constitution and its impact from 1787 through today.

Articles of Confederation draft, a printing proof of the Declaration of Independence, the 1784 Treaty of Paris signed by President Thomas Mifflin and Rhode Island's 1787 front page printing of the Constitution.

A presentation highlighting the importance of the Mississippi River.

A timeline highlighting the amateurs, professionals, inventors and innovations that have played an important role in the state's sports history.

Rare and authentic posters, buttons and other political memorabilia from the 18th to the 21st centuries.

A Salute to Minnesota's Greatest Generation

Videos explore the lives and legacies of Minnesotans who grew up amid the Great Depression, came of age during WWII, and participated in the postwar boom.

An exhibition of the formal gowns worn by first ladies.

Using historic and modern voting machines, visitors vote on the name of a new eagle from the National Eagle Center.

Hail to the Chief!

Visitors experience taking the Oath of Office and being sworn in as President, and will be captured on video.

Everyone attending receives a special souvenir credential and lanyard to commemorate the event!

Save $2 OFF each Ticket

As Minnesota takes center stage this summer hosting the 2008 Republican National Convention, we're inviting every Minnesotan to be a part of history in the making by experiencing this amazing event." -Cynthia Lesher President, Minneapolis Saint Paul 2008 Host Committee

Tickets: $15 for adults and $10 for students, seniors and active-duty military; children under 8 admitted free.

Group Rates: $10 for adults and $6 for students, seniors and active-duty military in groups of twenty or more.


We the People of the United States

Hail to the Chief!

Strike Up the Bandwagon

American Artwork: The Flag of the USA

From Haven to Home