While You're In Boston, Be Sure To Visit The While House. 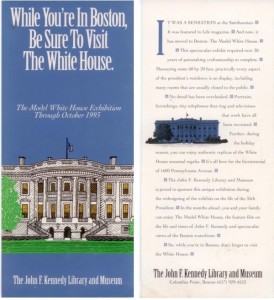 While You're In Boston, Be Sure To Visit The While House.

IT WAS A SENSATION at the Smithsonian. It was featured in Life magazine. And now, it has moved to Boston: The Model White House. a This spectacular exhibit required over 30 years of painstaking craftsmanship to complete. Measuring some 60 by 20 feet, practically every aspect of the president's residence is on display, including many rooms that are usually closed to the public.

No detail has been overlooked. Portraits, furnishings, tiny telephones that ring and televisions that work have all been recreated.

Further, during the holiday season, you can enjoy authentic replicas of the White House seasonal regalia. It's all here for the bicentennial of 1600 Pennsylvania Avenue.

The John F. Kennedy Library and Museum is proud to sponsor this unique exhibition during the redesigning of the exhibits on the life of the 35th President. In the months ahead, you and your family can enjoy The Model White House, the feature film on the life and times of John F. Kennedy and spectacular views of the Boston waterfront.

So, while you're in Boston, don't forget to visit the White House.