CivicFest to showcase state during RNC 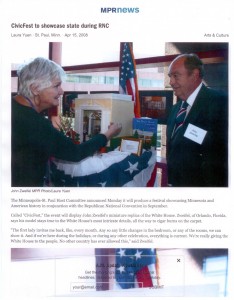 CivicFest to showcase state during RNC

The Minneapolis-St. Paul Host Committee announced Monday it will produce a festival showcasing Minnesota and American history in conjunction with the Republican National Convention in September.

Called "CivicFest," the event will display John Zweifel's miniature replica of the White House. Zweifel, of Orlando, Florida, says his model stays true to the White House's most intricate details, all the way to cigar burns on the carpet.

"The first lady invites me back, like, every month. Any so any little changes in the bedroom, or any of the rooms, we can show it. And if we're here during the holidays, or during any other celebration, everything is current. We're really giving the White House to the people. No other country has ever allowed this," said Zweifel.

At another exhibit, visitors will be able to sit at a replica of the Oval Office and pretend to sign a bill into law.

Mayors R.T. Ryback of Minneapolis and Chris Coleman of St. Paul say the event will give local residents a chance to embrace the once-in-a-lifetime opportunity of hosting the RNC.

CivicFest will be held August 29th to September 4th at the Minneapolis Convention Center.