The White House comes to Bismarck 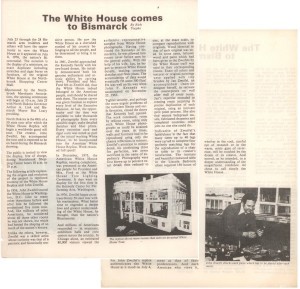 The White House comes to Bismarck

July 23 through the 28 Bismarck area residents and others will have the opportunity to view the White House as it appeared on July 4, 1976, the nation's Bicentennial. The occasion is the display of a miniature, an exact duplicate including scratches and cigar burns on furniture, of the original White House at the North-brook Shopping Center Mall.

North Dakota is the 49th of a 50 state tour after which the White House Replica will begin a worldwide good will tour. The creator, John Zweifel, has accompanied the tour and is expected to be on hand during the Bismarck showing.

The public is invited to view the display, free of charge, during Northbrook Shopping Center hours 10 a.m. to 10 p.m.

The following article explaining the origins and evolution of the project is reprinted courtesy of the White House Replica and John Zweifel.

In 1956, John Zweifel toured the White House in Washing-ton, D.C. Like so many other Americans before and after him he followed the predestined five room tour. And, like millions of other Americans, he wondered about all those other rooms he was not shown, but which had hosted the shaping of so much of the nation's history.

Unlike the others, however, Zweifel was a skilled artist whose curiosity was that of a patriotic and historically sensitive person. He saw the White House as a cherished symbol of his country be-longing to all the people, and he determined to bring it to them.

In 1961, Zweifel approached the Kennedy family with his newfound dream. He initially demonstrated both his genuine enthusiasm and artistic ability by carving more. President and Mrs. Ford felt as Zweifel did, that the White House indeed belonged to the American people, and should be shared with them. The master carver was given freedom to explore every level of the Executive Mansion. At last, the opportunity and the time was available to take thousands of photographs from every possible angle, make detailed sketches and blue prints. Every extension cord and cigar burn was noted as part of the actual working White House, to be incorporated into the American White House Replica. Work resumed full speed!

In December, 1975, the American White House Replica, nearing completion, was presented to the American people for President and Mrs. Ford at the White House Tree Lighting Ceremony. It then went on display for the first time in the Kennedy Center for Performing Arts, Washington.

In 1976, Zweifel began an extraordinary 50 state tour with his masterpiece. What better time to engender a deeper love and greater understanding of the White House, he thought, than the nation's Bicentennial.

And millions of Americans responded — in museums, exhibition halls and civic centers across the country. In Chicago alone, an estimated 80,000 visitors viewed the
authentic representative samples from White House photographs. Having convinced the Kennedys of his sincerity, he was allowed into rooms never before seen by the general public. With the help of his wife, Jan, he began to measure White House details, making countless sketches and floor plans. The accumulation of data would eventually fill some 300 files! He was well on his way when John F. Kennedy was assassinated on November 22, 1963.

Tighter security, and perhaps the more urgent problems of the turbulent Sixties and early Seventies, closed the doors that Kennedy had opened. The work continued, room by tedious room, using only such White House photographs as could be attained over the years. At times, walls and furniture had to be reproduced using only the chance reflections in mirrors. Zweifel's attention to minute detail, his unrelenting drive for perfection, was never sacrificed in the name of expediency. Photographs were first blown up to perceive exact detail; then reduced to
size, at the exact scale, to compare reproductions with originals. Wood identical to that of each original was us-ed. In some cases, leftover wood and paint which had been given to the Zweifels by the White House staff was used in their corresponding rooms. Exact oil colors and textures or original paintings were applied with tiny brushes by Jan Zweifel, an accomplished -interior designer herself, to recreate the masterpieces on wall after wall of every room. Jan's expertise extended to creating room carpeting in precise duplication of each original, using an intricate petit point process. She also tied minute bedspread tassels, fabricated draperies and completed countless other jobs no one else could do.

Indicative of Zweifel's faithfulness is the fact that many times up to 40 legs were carved to complete four perfectly matching legs for the reproduction of a chair or table to its creator's satisfaction. The intricate and beautiful rosewood table in the Lincoln Bedroom alone required 150 hours of

[photo] Kimby Zweifel straightens a chair in the Red Room.

carving to duplicate! And during the entire project, not one item was ever bought or collected and set ready made into a room.

Throughout the White House Replica, Zweifel installed thousands of tiny light bulbs which acutally burn and illuminate the rooms about them. These bulbs are attached to electrical wiring which is finer than human hair and is strung in a complex electrical network through the walls of the house. Burned out bulbs, therefore, require as long as four hours to replace in the White House Replica!

The American White House Replica is indeed a dream that came true. Measuring over 60 feet long and 20 feet wide, it represents over 200,000 man-hours spent by the Zweifels and their volunteers to carefully and tenderly shape $350,000 in materials into a lasting and fully dimensional documentation of the White House of 1976.

For John Zweifel's replica authenticates the White House as it stood on July 4, 1976. Constant attention will maintain its flower-fresh appearance of that Bicentennial Morning at the White House. And Is the actual Executive Mansion continued to re-paint a wall here and replace a chair there into the third American Century, the red, white and blue Bicentennial flower arangements in President Ford's Oval Office took their permanent place in Zweifel's masterpiece.

Following the extensive 50 state tour of the United States, the American White House Replica will begin a worldwide good will tour for the purpose of fostering a greater understanding of what the White House means to the American people.

Then, at last, it will come to rest at a permanent and ap-propriate exhibition site, a lasting display of our House of History. And one hundred years from now, in the Tricentennial Era, Americans will still stand before the American White House Replica in the same amazement as that of their predecessors. And each American who views it,
whether in the cool, careful eye of research or in the warm, misty gaze of reverence, will be touched by the dream of its creator. And moved, as he intended, to a deeper understanding of the magnificent residence we chose to call simply the White House.

[photo] John Zweifel checks each piece which has to be placed after each move.