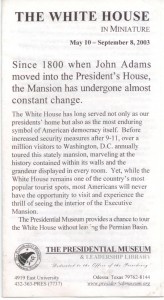 Since 1800 when John Adams moved into the President's House, the Mansion has undergone almost constant change. The White House has long served not only as our presidents' home but also as the most enduring symbol of American democracy itself. Before increased security measures after 9-11, over a million visitors to Washington, D.C. annually toured this stately mansion, marveling at the history contained within its walls and the grandeur displayed in every room. Yet, while the White House remains one of the country's most popular tourist spots, most Americans will never have the opportunity to visit and experience the thrill of seeing the interior of the Executive Mansion.

The Presidential Museum provides a chance to tour the White House without leaving the Permian Basin.

CHRONOLOGY OF THE WHITE HOUSE

1790 A site for the new national capital is selected along the Potomac River.

1791 Pierre Charles L'Enfant worked with George Washington to prepare a plan for the City of Washington. They reserved 82 acres for a "President's Park."

1792 The "President's Palace" is sited; L'Enfant's grand scheme was replaced by James Hoban's plan for the present White House. Masons laid the cornerstone on October 13, 1792.

1800 John Adams was the first president to occupy the White House, arriving at 1:00 pm, Saturday, November 1, 1800. Abigail Adams arrived on November 16, 1800. President Adams ordered a garden to be planted.

1801-1809 President Jefferson supervised the completion of the White House. Benjamin Latrobe served as the architect.

1816 Work was begun on the reconstruction of the White House, under the direction of James Hoban, who added 12 fireplaces since the building had not been warm enough in the winter. The building was painted white to hide the scars from the fire.

1817 President James Monroe moved into the reconstructed White House in the fall of this year.

1833 President Andrew Jackson had running water piped into the White House through iron pipes. Both cold and hot running water were available for the first time.

1845 The first icebox was installed in the White House.

1848 President James Knox Polk placed a statue of Thomas Jefferson on the North Lawn. Gaslights were installed in the White House in December.

1853 President Franklin Pierce expanded the White House orangery as a greenhouse. During his presidency, a coal-fueled central furnace was installed and used to heat water and air.

1857 President James Buchanan demolished the orangery to make room for a new Treasury wing. A replacement greenhouse was constructed on the west, adjoining the State Floor of the White House.

1857-1861 President Buchanan redecorated the Blue Room and auctioned off the older pieces purchased by President Monroe.

1861-1865 Soldiers and citizens vandalized the White House during the Civil War. Additionally, many items were stolen immediately following Lincoln's assassination.

1866 President Andrew Johnson tore down Jefferson's East Colonnade and created the side entrance to the South Grounds.

1871 President Ulysses Simpson Grant added a billiard room between the greenhouse and the mansion and built a great round pool on the South Lawn.

1873 Structural repairs and redecoration of the White House occured during the Grant Administration. Another round pool was built — on the North Lawn; the Jefferson statue was moved to the Capitol.

1877-1881 President Rutherford Birchard Hayes had a telephone and telegraph installed in the White House.

1880 The Ellipse south of the White House was completed.

1881 President Chester Alan Arthur redecorated the White House with the assistance of Louis C. Tiffany. Twenty-four wagonloads of furnishings were auctioned off. 1886 President Grover Cleveland was the first president to be married in the White House.

1891 Benjamin Harrison had electricity installed. Beginning in May, the electrical wiring was completed four months later.

1902 With the assistance of the architectural firm, McKim, Mead & White, President Theodore Roosevelt initiated a modernization and enlargement of the White House. The West Office Wing is added and Jefferson's East Colonnade is reconstructed. President Roosevelt changed the official name of the Executive Mansion to the "White House" by which it had unofficially been known for several decades.

1909 President William Howard Taft originated the idea of an oval office and ordered its construction shortly after taking office. Taft also ordered the installation of a new bathtub to accommodate his massive 6' 2", 332-pound frame. Taft was the last president to keep a cow on the White House lawn.

1917-1918 Edith Wilson had a small herd of sheep grazing on the White House lawn during the First World War: they produced 98 pounds of wool which was auctioned off for $100,000 to benefit the Red Cross.

1934 Under President Franklin Delano Roosevelt, the West Wing was rebuilt, adding a second floor and underground working space, and moving the Oval Office from the center to the southeast corner of the wing.

1948-1952 President Truman initiated a major renovation and enlarge-ment of the White House, including digging a new two-story basement.

1961-1963 Jacqueline Kennedy began a major restoration of the White House furnishings, acquiring many historic antiques — including some of President Monroe's furniture (which President Buchanan had auctioned off).

1964 President Lyndon Baines Johnson established the Commission for the Preservation of the White House and the permanent office of White House Curator.

1971-1972 Patricia Nixon refurbished the public rooms in the White House.

1977-1995 Exterior renovation is carried out: 21 layers of paint — 1/4" thick — is chemically removed from the entire exterior walls. Carved stonework is restored and a new coat of white paint is applied. 2001 President George W. Bush closed the White House to public tours after the September 11 terrorist attacks.

A dream of twenty-five years to create an authentic replica of the White House as a gift to his country was realized on December 18, 1975. On that date, John and Jan Zweifel unveiled their handcrafted White House replica for President and Mrs. Gerald Ford at the "Pageant of Peace".

The White House exhibit, a national treasure in its own right, is world famous. It has been displayed in all fifty states. It has been on display in the Presidential Libraries and Smithsonian Institution as well as in several European countries and Japan.

Spanning more than 55 feet in length from its east wing to the west wing, every detail of the stately mansion is faithfully recreated on a one-inch-to-one-foot scale. In 1961 the Kennedys gave the Zweifels access to rooms the public had never seen before. The assassination cut their progress short. But, under tightened security, the project continued under the Johnson and Nixon administrations. In the early 1970s the Zweifels toured the White House numerous times. Because note-taking, photography, and lingering are forbidden on the tour, he would note details mentally, walk out writing them down and then proceed to take the tour again.

From the tours and public photographs of rooms, he pu: together his first public display for the Central Florida Fair in February 1975. He had four rooms completed at the time along with furnishings from incomplete rooms. He sat with the exhibit, carving wood pieces of furniture and talking about his lofty goal.

"The house has developed its own character and its own history. The country grew - the government expanded - and the simple, elegant 'President's House' has evolved into the splendid and functional part home, part museum, and part office which we now call 'The White House'." — President Ronald Reagan.

"Anyone who has visited the White House knows the wonder of being in a place so rich with history and charm.... But there is no better way to experience the true spirit of the grand old mansion than to visit this astonishingly detailed replica. Its legacy is recreated from the early days of construction, through two centuries of transformation, reflecting the charactt ,:rid personal preferences of the families who have called it home." — President Jimmy Carter

Normal hours of operation for The Presidential Museum are 10 to 5. Tuesday through Saturday, and 2 to 5, Sunday. Addmission is $8 per adult; $5 per senior citizen and student. Museum Members are Free. Group tours may be scheduled by calling 432-363-7737. The museum is located immediately east of the Ellen Noel Art Museum.

Following is a "shopping list" to help you choose the category that best reflects your membership capability. Please check the appropriate classification and return this form with your payment.

If your employer or annuity program offers a matching gift incentive they can stretch your giving dollar. Simply provide us with the proper forms - we'll take it from there.