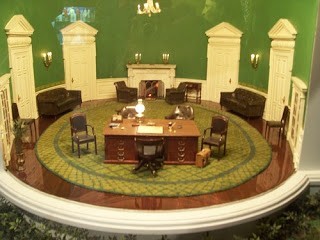 in the West Wing.

President William Howard Taft made the West Wing a permanent building, expanding it southward, doubling its size, and building the first Oval Office. Designed by Nathan C. Wyeth and completed in 1909, the office was centered on the south side of the building, much as the oval rooms in the White House are. Taft intended it to be the hub of his administration, and, by locating it in the center of the West Wing, he could be more involved with the day-to-day operation of his presidency. The Taft Oval Office had simple Georgian Revival trim, and was likely the most colorful in history; the walls were covered with vibrant seagrass green burlap.