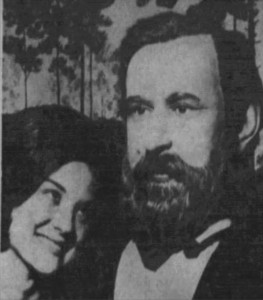 President U. S. Grant seems to be taking Diana Burton, Miss Clermont, for granted as she flashes admiring glances or else he is locked in thought about the nation's hard-fought past. The lifesize wax figure of the 18th president at the House of Presidents, Clermont, represents the former Union general on his 145th birthday, April 27.