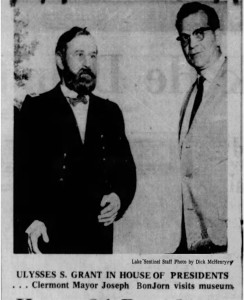 CLERMONT - Folks can learn a lot of history in 35 minutes at the House of Presidents Wax Museum adjacent to the Citrus Tower here.

The museum, central Florida's newest attraction, officially opens today, Washington's birthday, to the general public. But, a few members of the press and other interested, persons got a sneak preview yesterday at the only attraction of it's kind in the South.

The museum was constructed to resemble the White House in Washington and with its large pillars commands respect due a building paying homage to former U.S. chief executives.

PRESIDENT Lyndon Johnson standing tall, (6 ft , 3 in.) there, too, and take third place in height only to Abraham Lincoln at 6 ft. 4 in. and Thomas Jefferson, who stands slightly taller than Johnson.

The wax figures were made by Ivo Zini of Pittsburgh, Pa., with the exception of the delicately manufactured heads which were produced by Mrs. Lone Chaney of St. Petersburg from plaster heads Zini made from photographs.

Mrs. Chaney had the tedious task of adding the human hairs to the heads . strand-by-strand and painting just the right complexions on each president's face. Surgical eyes made for human use add an authentic gaze to each figure.

MUSEUM President F. J. Toole has worked since last July boxing the figures to bring to Florida from Pittsburgh, originally his home. He also has directed most of the work getting set up here next to the Citrus Tower. The museum will be open from 8 a m to 6 p.m., Toole said. Children under, 8 years of age are admitted free with adults.