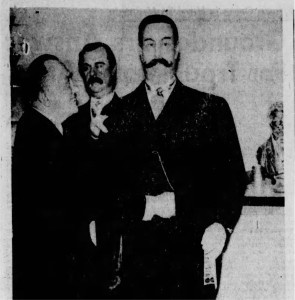 It wasn't especially a lively gathering but it was unique. And here's exactly what happened.

The Roosevelt cousins, Franklin D. and Theodore, both smiled as they posed for the photographer. Neither seemed to object to the presence of the Messrs. Abraham Lincoln, Calvin Coolidge, Harry Truman or Warren Harding in the same room.

Herbert Hoover never changed his genial countenance when asked to move so the Roosevelts could he photographed. Seems he grew used to being moved for a Roosevelt some 30 years ago.

In the adjoining room Benjamin Harrison dropped his umbrella. Most, likely the five-foote-six Harrison was awestruck at the six-foot-two massive figure of Howard Taft, with his 62 inch waistline, most of which was covered by his size 60 black suit.

Upon inquiry as to the whoreabouts of George Washington and Tom Jefferson, the information was given that they are staying tempoarily in the Blackridge area. Seemed logical, however, for a couple of old agrarians to want to be near the soil of the suburbs, away from the metropolis.

Proof of a definite lack of life occurred when Joanie Langdon, live and lovely, bounded into the room to
squint into the camera with D. D. Eisenhower and J. F. Kennedy. Neither so much as budged an eyeball. It was obvious they were sick or wax.

Which is exactly the case, for the dignitaries mentioned are wax figures of Presidents of the U. S., the exclusive property of F. J. Toole.

Mr. Toole, director of the Triangle School of Drafting, 230 Oliver Ave., and resident of 2415 Collins Rd., Blackridge, is the designer and co-owner of the Presidential Museum, Inc., of Clermont Fla. When completed in September, the museum will have a replica of each of the nation's 34 Presidents, exact to the slightest detail.

Six years ago, Mr. Toole conceived the idea. After two years of research and combing the country for capable persons to do the work, his project began. When finished later this summer, the "bodies" will be transported by truck to the museum site.

They're Not Exactly A Lively Bunch

Each figure costs $1600 . . . the head alone being valued at $800. All hair used is human, nothing synthetic. JFK's hair, for instance. came from a young girl in St. Petersburg, Florida, it being the correct texture and shade. She gave it with "vigahh" after her pigtails were cut.

"Everything is to the finest detail," Mr. Toole emphasized. "Look at this watch chain on Taft." Across so broad a spanse, it looked like the anchor chain from the S.S. Iowa.

"You know," he continued, "Taft weighed 332 pounds when he went into office. He left weighing 334." Citizens no longer need wonder why Pennsylvania Avenue is so wide.

One moot question did liven the gathering. Even the boys in wax have their opinions about the 35th figure to be added to the Clermont group.