Presidential Museum Due In Clermont 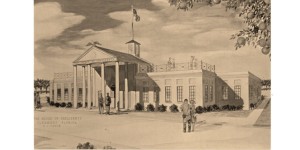 Presidential Museum Due In Clermont

CLERMONT ----- Plans for a Presidential Museum, a display of waxed figures of all the past presidents of the U. S. will be the next attraction to be constructed near the Citrus Tower.
A colonial and capital type building is to be built on the south side of the Tower. 15 figures completed to date by Frank Vittor of Pittsburg for display.
THE FIGURES are to be life size and characteristic of the past president at the age he entered office.
The idea was conceived by F. J. Toole, first president of the Florida Tower Corp. but is being separately organized. It will not be connected directly with the Citrus Tower.
Other officers of the museum corporation are Arthur Ekiert, vice president, Richard J. Zaiden, secretary, and C. J. Toole, George Dickson, and Joseph BonJorn, directors.
The waxed figures of President Woodrow Wilson and Calvin Coolidge were done from real life settings by Vittor. Leone Chaney, famous for her display of the Lord’s Last Supper did the wax work for the display.
It is proposed that Presidential Museum be a cultural and educational addition to South Lake County and Central Florida.