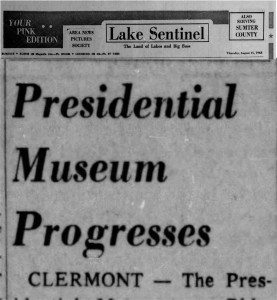 The Land of Lakes and Big Bass

CLERMONT — The Presidential Museum Bldg. here on U. S. 27 next to the Citrus Tower is about 60 percent completed, a spokesman for the coming Central Florida attraction disclosed yesterday.

The remaining 40 percent may take twice as long as the first 60 per cent, however, the spokesman said, because intricate electrical systems must be installed to operate the museum.

WAX likenesses of all past presidents and Pres. Kennedy are nearly ready for display in the building when it is completed. They are being produced in Pittsburgh, Pa., home of F. J. Toole, president of the museum t corporation.

Sound will he emitted from within the wax figures in tones believed to represent voices of the first U. S. presidents and be as near to the sounds of recent chief executives as possible.