This Lady Learns To Get "A Head" 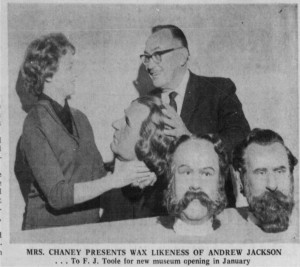 The Land of Lakes and Big Bass

This Lady Learns To Get 'A, Head'
By DICK MCHENRY Sentinel Staff

CLERMONT ---- Mrs. Leone Chaney is a lady who knows a dure way to get a head in the world.

The attractive St. Petersburg sculptress for some time has been creating former U. S. presidents' heads out of wax for display on life-size wax figures at the Presidential Museum expected to be opened here the first first of January.

Mrs. Chaney recently  brought the last three of 34 former presidents' heads to Clermont where she put them in the waiting hands of museum Pres. F. J. Poole.

THE HEADS are so life-like in appearance that viewers almost would expect to hear them speak. The eyes have every reason to be realistic since they are surgical eyes made for human use.

The hair on the past presidents is real human hair and so finely attached to the wax heads by Mrs. Chaney that it may truly be said only their hairdresser, Mrs. Chaney, knows for sure. She mounts the hair on the heads strand-by-strand pushing the hairs into the softened wax by hand with a special tool

But, just putting hair on the heads isn't enough for them to be realistic. Gray streaks must show through the appropriate hair colors of the subjects. Hair rollers such as those used everyday by the female set were used when Mrs. Chaney wished to add "natural" waves to her subjects' hair.

AND, FOR the final stroke e of realism, the skin texture must be right whether, the former chief executive was fair or ruddy complexioned. Oil colors applied in just the right amounts take rare of that.

Mrs. Chaney didn't sculpt the plaster heads from which the wax heads were formed. Those were done by Ivo Zini of Pittsburgh, Pa. the city from which Toole soon will he moving his family to Clermont.

Zini made the original as heads from photographs, then sent them on to Mrs. Chaney for her to use to pour the wax molds.

The fact that Mrs. Chaney is the daughter of the late Charles J. Bremser, famous St. Louis commercial artist, in part explains her natural ability for art and sculpting. Considering also that her uncle the late B. W. Christphel, was one of America's leading sculptors for more than 45 years, tells the rest of the story. Then, too, there was a lot of studious effort.

ANOTHER OF Mrs. Cheney's outstanding works have been displayed at the Lake Wales Passion Play Amphitheater are those on the life of Christ showing him in the Garden of Gethsemane, on the Crucifix and with his disciples at the Last Supper.

The museum, when opened soon, will feature a narrated tour with all the former presidents on display.

But, Mrs. Chaney has one more head to go before the museum is complete. It will be that of our new President who most people simply recognize now by his initials, LBJ.

When the last sculpured head is received, Mrs. Chaney will have Pres. Johnson finished P. D.Q.