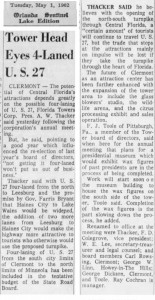 But, he said, pointing to a good year which influenced the re-election of last year's board of directors, "not getting it four-laned won't put us out of business.'

Thacker said with U. S. 27 four-laved from the north to Leesburg and the promise by Gov. Farris Bryant that Haines City to Lake Wales would be widened, the addition of two more lanes from Leesburg to Haines City would make the highway more attractive to tourists who otherwise would use the proposed turnpike.

Four-laning of U. S. 27 from the south city limits of Clermont to the north limits of Minneola has been included in the tentative budget of the State Road Board.

THACKER SAID he believes with the opening of the north-south turnpike through Central Florida, a "certain amount' of tourists will continue to travel U. S. 27, but the trade that stops at the attractions mainly on impulse will be lost if they take the turnpike through the heart of Florida. The future of Clermont (as an attraction center has been further enhanced with the expansion of the tower area to include the glass blowers' studio, the wild-life arena, and the citrus processing exhibit and sales operation.

F. J. Toole of Pittsburgh, Pa., a member of the Tower board of directors, said when here for the annual meeting that plans for a presidential museum which would exhibit wax figures of past presidents are in the process of being completed.

Work will start soon on the museum building to house the wax figures on the south side of the tower, Toole said. Completion of the wax figures is the part slowing down the process, he added.