Hail to the chief's better half 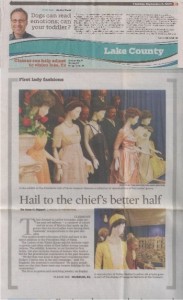 Hail to the chief's better half

A new exhibit at the Presidents Hall of Fame museum features a collection of reproductions of first ladies' gowns.

CLERMONT - They dressed in yellow brocades, pink satins and red taffetas — a rainbow of colors and an array of fabrics that made up the gowns that the first ladies wore during their husbands' inaugurations in the past decades.

This multicolored collection of frills and lace is the latest addition to the Presidents Hall of Fame. The Ladies of the White House exhibit features repli-ca gowns and other attire of first ladies during inaugurations. The exhibit, however, is not limited to first ladies, but also includes dozens of women who made a bid for the presidential nomination in the past decades. "We felt that was kind of important considering that Hillary Clinton was in the last campaign," said Joy England, the museum's coordinator. "So many people have no clue that there were any women bidding for the nomination."

The 20 or so gowns and matching jewelry on display
A reproduction of Dolley Madison's yellow silk empire gown is part of the display of inaugural fashions at the museum.

are reproductions that have been made over the years. The original gowns are housed at the Smithsonian in Washington, D.C., but these replicas are worthy of a close inspection, England said.

Included in the collection are copies of a yellow satin gown worn by Pat Nixon, a white chiffon gown worn by Jacqueline Kennedy and a navy blue suit worn by Hillary Clinton.

Some of the more intricate gown designs, like Nancy Reagan's white beaded gown, took more than eight months to replicate, said John Zweifel, the museum's curator. Michelle Obama's gown isn't there yet but a seamstress is working on it, Zweifel said. In addition, the museum also has some personal collections from the first ladies, such as dishes and correspondences.

"What we're trying to do is give people a look at not only the presidents and their first ladies, but also their country," Zweifel said.

The exhibit, which runs through September, will also highlight the 35 or so women who have made a bid for the presidential nomination. Most of the women have fallen into obscurity and represent the lesser-known political parties, but they had an impact, Zweifel said.