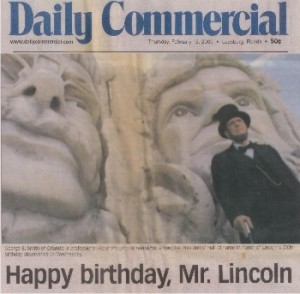 • CLERMONT — Abraham Lincoln turns 200 years old today. In Clermont on Thursday, visitors to the Presidents Hall of Fame attraction were able to 9 wish him a "Happy Birthday" in person.

"This, to me, is a once in a lifetime treat. To be able to see Lincoln in real life form, ask him questions, talk to him and take our picture with him," gushed Kathy Uhlenbrock, a winter resident from Valles Mines, Mo.

Lincoln was literally brought to life by George Smith, a professional Abe Lincoln impersonator who has performed the role more than 750 times in the United States and in England. John Zweifel, the museum's curator, made sure he had plenty of Lincoln memorabilia laid out.

As visitors arrived, Zweifel encouraged pictures at the replica of the Lincoln Monument and by Lincoln's face on Mount Rushmore — two of the museum's outdoor attractions.

As people browsed through the museum, they were able to see replicas of Lincoln's 1864 office, the Lincoln Bedroom in the White House, the Lincoln Ford Theater rocking chair and campaign signs from his campaigns.

Zweifel also put out some authentic items, such as Lincoln's lifemask and hands, a full-size Lincoln rosewood bed and a campaign-issue leather water bucket.

Zweifel also had birthday cake for those wanting to share a piece with Lincoln and was ready to answer any questions they had regarding the 16th president.

"Lincoln was one of the few presidents without a college education, but yet, the one with the most background and history," Zweifel said.

Zweifel said it's one thing to read and hear about Lincoln, but when people scan ask a question and get an answer in person, as Lincoln would have answered, it becomes more personal.

Zweifel said he's planning on several presidential impersonators visiting the museum this year, including Obama in July. But on Thursday the focus was on Lincoln.

On the way out, people seemed to leave with a genuine sense of having spent time with him.

Smith said some of the most common questions he's been asked about Lincoln over the years are, "What number president were you?" and "How tall are you?" He also fields questions about the Emancipation Proclamation (which abolished slavery in the rebel states), his Gettysburg address (spoken at the bloodiest of Civil War battlefields) and his letter of condolence to Lydia Bixby (who lost five sons in the Civil War). Lincoln was assassinated in 1865.

granddaughter, Maddie, to Springfield, Ill., and to Indiana on a trip to learn about Lincoln.

Uhlenbock said Maddie will be thrilled to see pictures from their visit to the President's Hall of Fame museum and to hear about all they learned about Lincoln.

"President Lincoln was born in 1809 on February 12," Smith said. "This year constitutes 200 years of his birth, so its created sort of a flurry of attention on him."

"Personally though, I am greatly honored to be able to represent a man of his character."