He easily fills a tall order 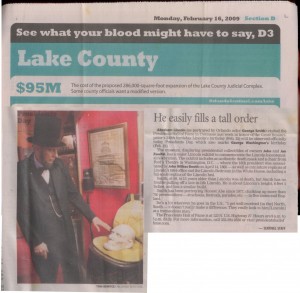 He easily fills a tall order

The museum, displaying presidential collectibles of owners John and Jan Zweite!, has a major Lincoln exhibit to commemorate the Lincoln bicentennial celebration. The exhibit includes an authentic death mask and a chair from Ford's Theatre in Washington, D.C. — where the 16th president was assassinated by John Wilkes Booth on April 14, 1865 — as well as miniature replicas of Lincoln's 1864 office and the Lincoln Bedroom in the White House, including a full-scale replica of the Lincoln bed.

Smith, at 69, is 13 years older than Lincoln was at death, but Smith has no trouble pulling off a late-in-life Lincoln. He is about Lincoln's height, 6 feet 4 inches, and has a similar build. Smith has been portraying Honest Abe since 1977, chalking up more than 750 presentations — at schools, festivals, parades, etc. — in five states and England.

He's a hit wherever he goes in the U.S.: "I get well-received [in the] North, South — it doesn't really make a difference. They really look to him [Lincoln] as a tremendous man."