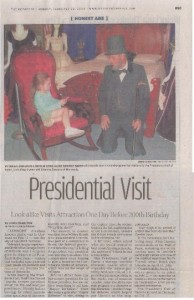 Veteran Abraham Lincoln look-alike George Smith of Orlando was a surprise guest for visitors to the Presidents Hall of Fame, including 4-year-old Brianna Stevens of Minneola.

CLERMONT - Abraham Lincoln paid a visit to Clermont on Feb. 11 — one day shy of his 200th birthday.

Veteran Lincoln impersonator/look-alike George Smith of Orlando was a surprise guest for visitors to the Presidents Hall of Fame — visitors that included nine-year-old Tyler Smith of Clermont and four-year-old Brianna Stevens of Minneola.

While touring the Presidents Hall, Smith had heard Lincoln answer questions about his life and wartime presidency. Shortly before leaving, he asked Lincoln some questions of his own: namely, who shot him, and "Why'd he do it?"

The answer, of course, was that John Wilkes Booth, who assassinated Lincoln, was part of a conspiracy to throw the federal government into disarray by killing the president, vice-president and secretary-of-state. The conspirators were hoping to give a boost to the Confederate States of America, which was on the verge of collapse.

Brianna didn't have any last minute questions for the former president, but she did have something to tell him: "Happy birthday." Then she sang a graceful "Happy Birthday" to him, sitting in the replica Lincoln rocker besides the full-sized replica of the Lincoln bed, besides the 6-foot 4-inch performer in his stovepipe hat.

A bit later, when asked what she would remember best about Abraham Lincoln, she answered "I think he has a nice smile."

The Presidents Hall of Fame, a vintage roadside museum, boasts what is arguably the largest privately-held collection of U.S. presidential memorabilia in the world. One of museum curator John Zweifel's current projects is a diorama of the historical Lincoln/Douglas debates, which helped put Lincoln on the map, politically.

"Our wish it to unveil it within the next six months," Zweifel says. In the meantime, he's featuring some of his Lincoln memorabilia at the Hall of Fame, including one of the torches used in Lincoln's campaign rallies and one of the original seats from Ford's Theater, where Booth shot Lincoln on April 14, 1865.

Coincidentally, Ford's Theater re-opened to the public on Feb. 11— the same day as Smith's Lincoln performance in Clermont — after an extensive renovation. The Presidents Hall of Fame is located in Clermont on U.S. 27.