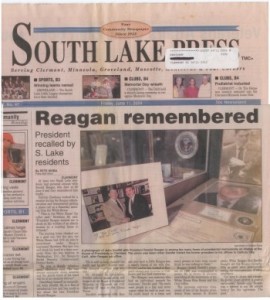 CLERMONT- At least two South Lake residents had personal contact with Ronald Reagan who died at 93 June 5 and they remembered him fondly.

Patricia Hawkens worked for a senator during the Reagan administration and remembered getting a phone call on a Saturday morning from the White House.

" 'This is the White House' the caller said." Hawkens, 65, said. "President Reagan wanted me to check on the welfare of an elderly woman in a nursing home in Orlando."

The nursing home checked out as a good one, but the care the White House had with an elderly constituent under Reagan impressed Hawkens. She met him and shook his hand at a later ceremony when she was working in Washington, D.C., for Reagan's Social Security Commissioner Dorcas Hardy.

"He was a deeply religious man,' Hawkens said. "He was always optimistic about America and the gentle touch of his hand will be in my memory forever."

Describing himself as nonpolitical, John Zweifel, 68, is a font of presidential lore and has much to say about the late President Ronald Reagan.

Staff photo by Christ an Fuchs A photograph of John Zweifel with President Ronald Reagan is among the many items of presidential memorabilia on display at the House of Presidents in Clermont. The photo was taken when Zweifel visited the former president in his offices in Century City, Calif., after Reagan left office.

"He is said to have changed the world and he did," Zweifel said. "He changed everyone who met him.

No stranger to presidents, Zweifel collects memorabilia and keeps it at the House of Presidents Museum in Clermont on U.S. Highway 27 next to the Citrus Tower.

Zweifel's connection with Reagan goes back to 1954. Reagan was a family friend of his wife Jan. Zweifel said he has worked at Reagan's library and museum in California and has fond memories.

"He (Reagan) was someone who had an individual remark for everyone," Zweifel said. "He could meet people in a line and never repeat what he said to each one. He could stand in a room and
every person in that room would think he was talking to them.

"Reagan visited Zweifel's museum in 1990 and autographed a poster. He is shown in pictures marveling at the miniatures of the White House Blue Room and his Oval Office.

The museum contains thousands of bits of the Reagan presidency from menus to dinner plates. When Reagan died Zweifel brought out the Reagan memorabilia to place more prominently among the remembrances of other presidents.

"I'm here to share and educate the public about all that is good of our country," Zweifel said. "Reagan was a mentor to me. He always looked for the optimism. The good."