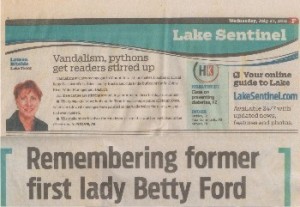 In 1975, then-first lady Betty Ford allowed Jan and John Zweifel access to continue their mission to make a historically accurate White House replica, which is on display at the Presidents Hall of Fame in Clermont.

The date remains emblazoned on their minds because it was the day the then-first lady allowed them unprecedented access to the White House.

It was because of Ford the Zweifels were able to continue their mission to make a historically accurate replica of the White House, which is displayed at the Presidents Hall of Fame in Clermont. Decades later, the friend-ship between the Fords and the Zweifels remained strong.

When Ford died earlier this month at age 93, the Zweifels said they were saddened by the loss of their dear friend. She was kind, funny and a straight shooter, they said.

"She was a mother to many people," said John Zweifel, who owns the historical attraction in south Lake with his wife, Jan. "If she hadn't lived, the White House replica may have never happened."

Betty Ford: The Zweifels kept in touch with the Fords since 1975.

When Gerald Ford took over the presidency following Richard Nixon's resignation in August 1974, Betty Ford immediately made her mark as first lady.

"The first lady made it clear when they moved in [to the White House] that they slept together," John Zweifel said, adding that that was an extraordinary move because up until that point, presidents and wives had separate bedrooms.

Allowing the Zweifels to have access to the White House was part of a way to mend fences with the public, John Zweifel said.

"Watergate had created such a bad image of the White House," he said. "The president wanted to
open it up."

For two weeks, the Zweifels were given "carte blanche" to go through the White House, including the Lincoln bedroom and the private residence, which is usually restricted to the public. The 60-by-20 foot White House replica is now at the museum, 123 N. U.S. Highway 27. It has traveled around the country for various events, including the 2008 Republican National Convention in Minneapolis.

After that first White House trip, a friendship was forged. The Zweifels went on to visit the Fords in their private residences after they left the White House. They continued to exchange Christmas cards through the years.

Jan Zweifel said Betty Ford was open about so many aspects of her life, including her battle with breast cancer. At the time, many people didn't openly talk about cancer.

"She was a wonderful, warm, open person," Jan Zweifel said. "We cherished our friendship with both of them."